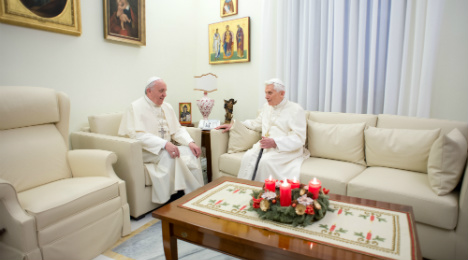 One year on from the resignation announcement on February 11, the German pontiff who held the reins of the Church during an eight year, scandal-hit papacy appears to have been largely forgotten by the public.

In the kiosks surrounding the Vatican, the wizened face of Joseph Ratzinger the academic theologian has almost disappeared from postcards and gadgets, replaced by a smiling Pope Francis or the ever-popular John Paul II.

Having a pope and a "pope emeritus" at the Vatican at the same time had sparked fears of confusion for the faithful, but Benedict has kept out of the limelight. And his Vatican fans say Benedict is far from obsolete.

"Curiously, he has never been so present on the scene," French cardinal Paul Poupard told AFP. "The false image of the Panzerkardinal has gone. Amid a breakdown in society, he is a luminous point of reference," he said.

Poupard said Benedict had regained his favourite role of "Herr Doktor Professor" and "does not want to get involved in the goings-on in the apostolic palaces".

Before stepping down from St. Peter's Chair on February 28, he promised to live "hidden from the world", dedicating himself to a life of quiet prayer and swearing allegiance to whoever his successor would be.

The first images of him meeting new pope Francis shocked the Catholic world: standing next to the energetic Argentine, the ex pontiff appeared suddenly to have aged 10 years, as if the weariness he felt during his papacy had finally caught up with him.

In May, he moved into a former monastery in the grounds of the Vatican — which came with its own vegetable garden and a splendid view of Rome — along with his personal secretary Georg Gänswein and his housekeepers.

He is believed to have ventured out only twice: once for a return trip to Castel Gandolfo and once to visit his brother Georg when he was hospitalised in Rome.

"I live like a monk. I pray and I read. I am well," the 86-year-old told a journalist who visited him in June.

People who have spent time with him say he likes to listen to music and play the piano, and German cardinal Gerhard Ludwig Müller has said he thinks the pope emeritus may be writing his autobiography.

His life is not shrouded in solitude: Benedict's 90-year-old brother has stayed with him for an extended period and close friends are known to have dropped by to see him, along with prelates and theologians eager to debate with a man renowned for his fierce intellect.

His relationship with Francis "is good, even if he does not necessarily agree with all his initiatives," a cardinal told AFP on condition of anonymity.

The 77-year-old Argentinian often pays homage to his predecessor, citing him in his texts, telephoning him for a chat or meeting him for breakfast.

"It's like having grandfather at home," Francis confessed to journalists during a work trip, adding that he often felt the need to consult him on things.

The new pope has made limited references to the scandals in the Church which weighed heavily on Benedict: the sexual abuse of children by priests, allegations of infighting in the Vatican and a leaks scandal orchestrated by the German pope's butler.

Poupard said that as a rank outsider from the Vatican, Francis offers "a new look" on how to reform it.

Francis has called for the Church to reach out to the physical and spiritual "peripheries" of the world.

His papacy so far has seen powerful gestures — washing the feet of young Muslim inmates, embracing the handicapped and asking that gay people not be judged.

After a slow start on reform, he has made several surprise Vatican appointments recently and distanced hardened conservatives — also thanks to the advice of a "council of cardinals" he set up to advise him.

While no one expected him to make major changes on doctrine, he has at least shown a willingness to encourage greater understanding and pastoral care for Christians who are divorced, single mothers or gay.

Benedict's only public statement since retiring was a surprise — a letter he wrote to Italian atheist mathematician Piergiorgio Odifreddi, responding to the latter's critical book on the Church.

In it, the former pope defended his handling of the sexual abuse crisis and denied accusations which dogged his papacy of a Church cover-up.

"I never sought to conceal these things," Benedict said.

Recently-released figures on the defrocking of predator priests appear to confirm this, at least in part.