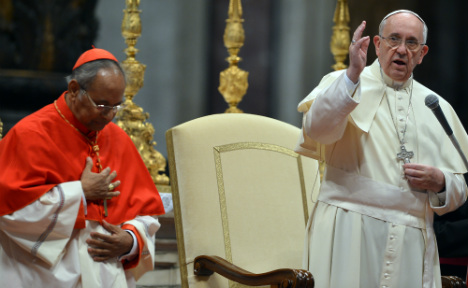 The beatification ceremony for Paul Yun Ji-chung and his 123 fellow martyrs — who were killed for their Catholic beliefs between 1791 and 1888 — will take place in South Korea on August 15th, the Vatican said in a statement.

The ceremony could well be attended by the pontiff himself after the Vatican last month said Francis was considering a trip to South Korea to coincide with Asian Youth Day in mid-August.

Also on Saturday the pontiff met with a group of Sri Lankan immigrants living in Italy and accepted an invitation to visit their country, without however specifying when the trip might take place.

Pleading for reconciliation in Sri Lanka nearly five years after the end of a bloody separatist war, the pope said: "It is not easy, I know, to heal the wounds and cooperate with yesterday's enemy to build tomorrow together, but it is the only path that gives hope for the future, hope for development and hope for peace."

"I ask the Lord to grant you the gift of peace and reconciliation," he said in an audience at St Peter's Basilica at the Vatican.

Francis also thanked Cardinal Malcolm Ranjith, the archbishop of Colombo, for an invitation to visit the island nation.

"I accept it and believe the Lord will give us this grace," the pope said, without elaborating.

Asia has repeatedly been tipped as a destination for possible papal trips as Francis's predecessor Benedict XVI did not travel there during his eight-year pontificate and evangelization in the continent is a big priority for the Vatican.