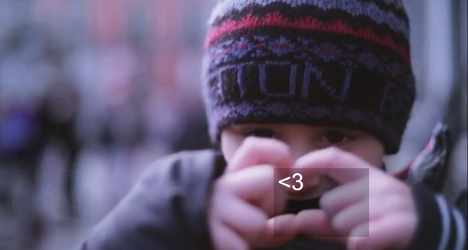 The children were asked a series of love-related questions. Screenshot: fanpage/YouTube

By the age of ten, Italians are already fluent in the language of love and are pretty certain they know what “amore” is all about.

Love is “the most beautiful thing in my life” and “a feeling of joy”, as defined by a group of children filmed for the news website fanpage.it.

In the video published on Sunday, the children are asked a string of love-related questions including: “Do you think love between a man and a man, or a woman and a woman, exists?”

“The important thing is that someone has the capacity to love,” says one girl, with another arguing, “They’re free to do what they want”.

One boy says: “If love is about people caring about each other, it’s not important whether they’re men or women.”

Despite some being uncertain, the children voice a unanimous “Yes!” when asked finally whether it is enough that people are in love.

Their views stand in stark contrast to those of some of the country's adults, who continue to clash over gay rights.

But despite such views and the strong influence of the Catholic Church in Italy, attitudes towards gay rights are gradually changing in the country.

Last year Rome’s new mayor, Ignazio Marino, said he was open to gay marriage, while last month an Italian court ruled for the first time in favour of a gay couple fostering a child.