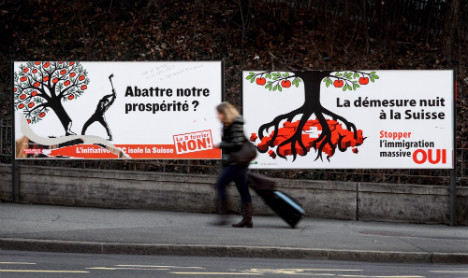 Posters for and against immigration curbs in Switzerland. Photo: Fabrice Coffrini/AFP

Roberto Santalucia said the vote will “reinforce right-wing policies” and is only intended to “exclude others”, something that could have a worrying impact on the rest of Europe.

“It’s an exclusion policy, but what we need right now is the opposite: we need to be helping those in difficulty, not closing the door on them,” he said.

A majority of Swiss voters on Sunday backed an initiative from the right-wing Swiss People’s Party (SVP) to curb immigrants from the European Union.

Italy's foreign minister Emma Bonino said on Monday that the measure was "worrying for Italy and for other agreements with EU countries."

Santalucia added that the vote was also a concern for Italians living in border areas, such as Como and Varese, who commute each day to Switzerland for work, and worrying for the country to be so "inward looking".

The vote, which 50.34 percent of the electorate favoured, will now oblige Switzerland to set its own quotas for immigrants from the EU, and puts the country on a collision path with other countries in the union.

Foreigners make up 23 percent of the population in Switzerland, which last year saw the arrival of 80,000 new immigrants.The majority of recent immigrants are from Germany, Italy and France, as well as Portugal.

In a comment piece in La Stampa on Monday, Tonia Mastrabuoni wrote: "there are even more negative consequences for the Italians: the provinces that border Switzerland, in particular those of Como and Varese, have so far withstood the crisis mainly due to the possibility, for many, to work across the border. Now it will be harder.”

Voters in Ticino, the Italian-speaking canton, were decisive in swaying the move, with 68 percent supporting the measure due to concerns over the influx of immigrants, and black market labourers, from Italy.

“There has been a strong increase in the number of daily commuters, and seasonal workers, from Italy in Ticino,” Ferruccio Pastore, director of the International and European Forum for Migration Research in Turin told The Local.

“And many Italian companies have moved across the border, bringing their own workers with them.”

The irony is that “many Italians have voted against Italians”, Pastore added.

“Italian labour is a major source of immigrant labour in Switzerland, and investment from Italian firms represents a huge chunk of the economy,” he said.

“The pro-quota coalition is not only made up of right-wing people, but also people from immigrant families who are against ‘social dumping’ and fear for their own jobs. There are also cultural anxieties, and to some degree, prejudice.”

The vote is also a concern for Swiss companies, who also “fear the consequences of the referendum”, Pastore said.

“They are also frightened about the economic impact in Switzerland.”