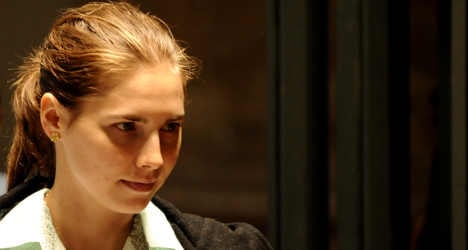 Amanda Knox was last month sentenced to 28 years and six months in prison for the murder of Meredith Kercher. Photo: Mario Laporta/AFP

Knox posted a black and white photograph of herself on Twitter on Tuesday evening, holding a sign reading “Siamo innocenti” (“We are innocent”).

The photograph comes less than two weeks after Knox and Italian Raffaele Sollecito were convicted of stabbing Kercher to death in the Italian city of Perugia in 2007.

The pair were first found guilty of the murder in 2009 but released on appeal in 2011, before Italy’s highest court last year ordered a retrial.

Last month Knox was sentenced to 28 years and six months in prison while Sollecito received a 25-year sentence; the only person currently jailed for the murder is local drug dealer Rudy Guede who had a separate fast-track trial in 2009.

Knox published her photographic plea from her hometown of Seattle in the US, while she waits for her latest appeal to get underway. Sollecito has been ordered to stay in Italy and has been keeping a comparatively low profile throughout the legal proceedings.

While Knox may have hoped the photograph would boost her chances of appeal and improve her reputation in Italy, Twitter users chose instead to express their disapproval by doctoring the image.

“Siamo [we are] convicted by three separate courts of framing an innocent man for murder (but I still haven't paid his damages),” they wrote.

You might enjoy this bit a anti-propaganda, to counter Knox spin… pic.twitter.com/35Ktuis7Od

Another went for a simpler message of: “I am sooo screwed.”

You said it Amanda knox! pic.twitter.com/T21iD4WteE

“Please, keep convincing your people in US,” was the response from one Italian.

Under the Italian justice system both Knox and Sollecito will remain out of prison throughout their appeal, a process which will take many months and could stretch into 2015.

SEE ALSO: US likely to extradite Knox if Italy asks