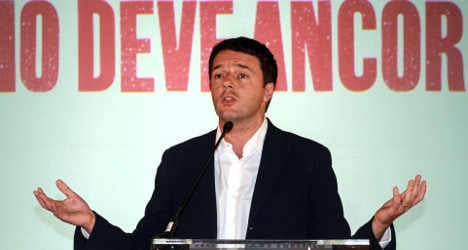 Renzi said there was "necessity and urgency of opening a new phase with a new executive" at the start of a key meeting of the leadership of his Democratic Party (PD) that is expected to decide whether to back Letta or Renzi.

"We have to offer a way out of the marshes with a radical programme and profound change," he said, adding that the party and the country were at a "crossroads".

He did not say directly whether he wanted to take over from Letta in a "relay" manoeuvre as reported in the press and asked for the views of party members.

"It's not about relay or not. A relay is when you are going in the same direction and with the same speed, not when you are trying to change the speed," he said.

Tensions have been rising ever since the now 39-year-old Renzi was elected to the Democratic Party leadership in December and immediately accused the government of dragging its feet over vital reforms.

Letta wrote a brief note to the party leadership calling for "serenity and transparency" saying that he would not be attending Thursday's meeting so that members could "feel free to express their opinions".

Letta and Renzi failed to resolve their differences at talks on Wednesday and a defiant Letta ruled out resigning at a press conference later in the day in which he presented his reform programme for the year.

"The final clash is here. The fight between Enrico Letta and Matteo Renzi enters its last round today," said Claudio Tito, a columnist for La Repubblica.

"If the leadership of the Democratic Party confirms the criticism of the government expressed in these days, the prime minister will have to draw his conclusions."

Stefano Folli, an analyst for the Il Sole 24 Ore business daily, also said Letta could be on his way out.

Renzi "has to now strike the fratricidal blow in front of the television cameras today," he said.

The feud has exposed infighting within the centre-left party and one of the 140 members of the leadership, Pippo Civati, said it was "a time of great confusion."

Most analysts predicted the imminent demise of Letta after less than a year in government and a switch with Renzi, who could take the prime minister's post and form a new government without a need for elections.

Letta was named by President Giorgio Napolitano to end a two-month impasse following inconclusive elections in February 2013 and was preceded by economist Mario Monti, who was also appointed by the president.

Letta on Wednesday accused Renzi of trying a "palace manoeuvre" to unseat him and defended his record. "You don't resign over gossip," he said.

"It is absolutely not in my DNA to break with the continuity of service to this country.

"Everyone has to express themselves clearly, especially someone who wants to come and take my place."

Letta said growth figures on Friday would confirm Italy's gradual recovery from a painful two-year recession that has pushed unemployment to record highs.