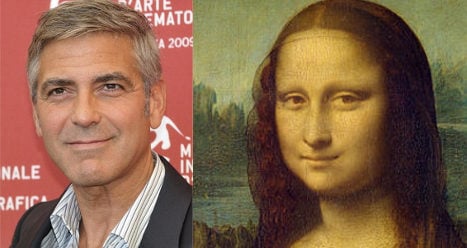 George Clooney has called for the Mona Lisa's return to Italy. Photos: Wikipedia

The comments were made during a promotional tour for Clooney’s new film, The Monuments Men, in Milan, according to a report in Hollywood Reporter, and is likely to reignite the spat over the world’s most famous painting between the two nations.

George Clooney is sometimes referred to in Italy as the 'treasure of Laglio', the small town on Lake Como where he owns a villa.

France has fiercely guarded Leonardo Da Vinci’s masterpiece, which has been hanging in the Louvre museum in Paris since 1797.

It was bought by France's King Francis I shortly after its completion in the 16th century.

The painting returned to Italy just once since then, and that was only because it was stolen by Vincenzo Peruggia, a former employee of the Louvre who reportedly believed the portrait should be in an Italian museum, in 1911.

It wasn’t tracked down until 1913, when it was found in Peruggia’s home in Florence.

Italy has made several failed bids for its return, most recently last year when it sought to borrow the painting as part of an exhibition marking the centenary of its recovery following the theft. More than 150,000 Italians signed a petition to bring the painting to the Uffizi museum.

But France refused, saying that lending the work would present “many technical difficulties”.

The portrait is believed to be of Lisa Gheradini, the wife of Francesco del Giocondo, a wealthy silk merchant from Florence.

Clooney also caused a stir last week when he called on Britain to return the Elgin Marbles to Greece.