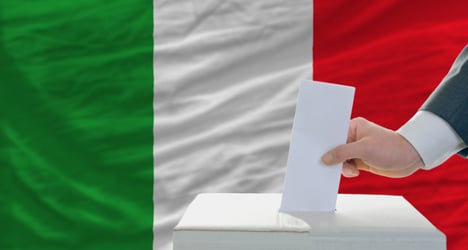 In Italy voters have been collectively cast aside in the king-making. Voting photo: Shutterstock

Politicians from Italy’s Democratic Party (PD) – Italy’s largest political power – on Thursday voted to collectively oust their own prime minister from power in bid to install party leader Renzi in his place.

There can only be one lead in this political play, and the centre-left decided that after governing for less than ten months Letta must make way for a younger protagonist.

It is true that prime ministers in parliamentary systems are almost always picked by their party members or the head of state, and are occasionally changed mid-term. Indeed, in the UK both John Major and Gordon Brown came to power in this way. In Belgium the monarch has been forced to pick prime ministers on numerous occasions.

The problem in Italy is that this has become a habit – voters have been collectively cast aside in this king-making, for the third time in just over two years.

With a “pigsty” electoral law, recently deemed unconstitutional, an imminent return to the polls seems unlikely. If Renzi sticks to his intended aim to govern until 2018, Italy risks being without a democratically-elected leader for seven years.

For any country this is a grave outlook, but for Italy – which will soon take up the EU presidency and preside over 500 million Europeans – such a move would have implications far beyond the country’s borders.

While international attention has been drawn to the Letta-Renzi power struggle, played out in the pages of the country’s partisan newspapers, Italy's democratic deficit has existed in a different form since Renzi was just a Tuscan teenager.

The “bribesville” (“Tangentopoli”) scandal of the early 1990s, which revealed rampant political corruption, decimated Italy’s main political parties and led to a void billionaire Silvio Berlusconi was only too happy to fill.

The self-proclaimed playboy’s dominance of the political scene, since clinching his first election victory in 1994, was reinforced by his vast ownership of Italian media; a conflict of interest which would rarely be allowed in a democratic state.

Yet it was following Berlusconi’s forced resignation in November 2011, as Italy appeared on the brink of economic collapse, that Italy took another sharp undemocratic turn.

“Super Mario” as he was known swept in the promised reforms, which were welcomed as salvaging the country’s economy but bore heavily on the shoulders of everyday Italians.

In an effort to appease those critical of his being appointed rather than elected, Monti promised a short term in government and Italians returned to the polls in February 2013.

But rather than entering a new democratic era, elections heralded a fresh political crisis and the arrival of Italy’s next unelected leader – Letta.

His appointment last April can be attributed principally to the political class’ inability to put country before ego.

Had politicians from the three largest parties – the PD, Berlusconi’s then-named People of Freedom (PdL) party and the Five Star Movement (M5S), led by Beppe Grillo – sat around the negotiating table, Italy could have been ruled by a coalition government as seen in stable democracies such as Germany and the UK.

But instead politicians fought for two months before Napolitano was forced once again to appoint the prime minister, choosing a second steady pair of hands to see through vital reforms.

Renzi has been waiting in the wings for more than a year, since coming a narrow second in the PD primary elections of December 2012. After leader Pier Luigi Bersani was forced to resign following the PD’s poor election performance in February, Renzi’s moment finally came last December when a new primary saw him named party secretary.

The outlook was momentarily promising, as last month Renzi launched his political programme in apparent agreement with Letta.

As leader of the country’s biggest party, Renzi was tasked with drawing up the country’s new electoral law; a proposal which is currently being debated in parliament. Yet before this vital reform could be passed, Renzi and PD politicians this week decided Italy was in need of “a new phase with a new executive”.

Renzi, who ahead of the 2012 primaries called for a new era in Italian politics, has in reality adopted the same tactics of the “old guard” by launching a political coup without thinking of its long-term impact.

The PD leader on Thursday spoke of the need for “profound change”, yet failed to realize that taking the reigns of power from Letta is a regressive step which only perpetuates a worrying trend in Italian politics.

Renzi and his party have missed the opportunity to back Letta’s own reforms, which could have paved the way for fresh elections later this year and a stronger government as a result.

It is highly unlikely Renzi, mayor of Florence who does not have a seat in parliament, will be able to lead a government until 2018.

Instead this week Italy enters a new phase of instability, both politically and economically, with democracy cast aside.