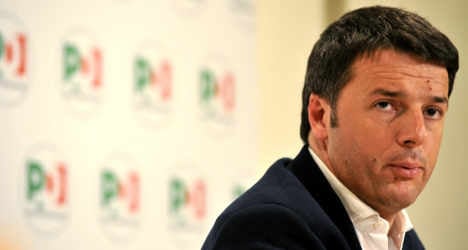 Matteo Renzi would be the youngest serving government leader in the EU. Photo: Tiziana Fabi/AFP

As head of the Democratic Party, Renzi engineered the ouster of his predecessor Enrico Letta – a member of his own party – accusing him of
failing to live up to reform pledges in his stormy 10 months in government.

The 39-year-old will have to move quickly to form a new government once he gets the mandate from President Giorgio Napolitano as expected at 0930 GMT and then deliver his promise to lead Italy "out of the quagmire".

The previous coalition of the Democratic Party, the centrists and the New Centre-Right party is expected to remain intact even though the leader of the latter, Angelino Alfano, has warned this is "not a given".

The New Centre-Right is a minor partner in the coalition but its votes would be critical for Renzi as all other parties say they are staying in
opposition and he does not have a majority in parliament.

If he succeeds in forming the government, Renzi would then have to return to Napolitano for his nomination to be confirmed and would then be sworn into office.

Analysts say the whole process could take a few days.

The energetic and web-savvy Renzi, who is also mayor of Florence, has no previous experience in national government or parliament and is seen by many as having the right kind of outsider credentials for the job.

But his critics warn he risks burning out rapidly.

Many people seem willing to give him the benefit of the doubt even though they would have preferred early elections, as long as Renzi delivers on his promises to combat rampant unemployment and boost growth.

His on-the-ground local achievements like lowering some taxes, boosting recycling and encouraging innovation are seen as positive signs but analysts say he will really now have to prove himself on a much bigger scale.

Renzi is little known internationally but sees himself in the mould of former British prime minister Tony Blair and his "New Labour" programme and his rise is being closely-watched by centre-left parties in Europe.

He would be the youngest serving government leader in the European Union.

His informal style is unusual in Italy's political world and his prolific use of social media and knack for catchphrases have endeared him to many younger Italians turned off by an ageing political elite.

His leather-and-jeans dress sense have also earned him the nickname "Fonzie" – from the US sitcom "Happy Days" – and his retro sunglasses have been likened to those used by the comedy band "The Blues Brothers".

But the past few days have cast Renzi in a darker light.

One of his critics in the Democratic Party, Pippo Civati, compared his increasingly bitter feud with Letta to a Western and his operation to unseat Letta to the Jack Nicholson horror classic "The Shining".

Following his election to the party leadership in December, Renzi had ruled out unseating Letta but did just that on Thursday, when he tabled a motion to senior party members calling for a new government.

The motion was approved with a crushing majority in what appeared to be a stage-managed event that came a day after Letta defiantly vowed not resign and accused his rival of attempting a "palace coup".

One beneficiary of the internal struggle in the centre-left has been Berlusconi.

The three-time former prime minister has scored political points by accusing Renzi of not behaving democratically, despite having himself been expelled from parliament last year over a tax fraud conviction.

Berlusconi is also involved in three other court cases including for allegedly bribing a senator to join his party, having sex with an underage 17-year-old prostitute and abusing his prime ministerial powers.