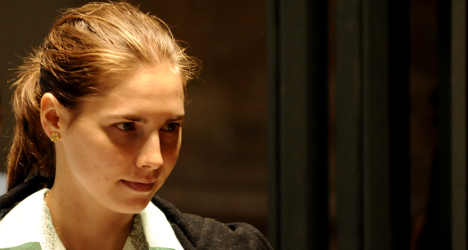 Speaking to police on December 17th 2007, six weeks after fellow exchange student Kercher was stabbed to death in Perugia, Knox said she implicated bar owner Patrick Lumumba out of fear.

“I was stressed, I was scared, it was after long hours, it was in the middle of the night, I was innocent and they were telling me that I was guilty!” she is heard telling police.

“In that moment that I said Patrick’s name I thought that it could have been true,” Knox said, adding that she “couldn’t understand” why police were accusing her of lying.

Knox and her former lover Raffaele Sollecito, were last month found guilty of the murder. The pair was first convicted in 2009 but released on appeal in 2011; last year Italy’s highest court ordered the retrial which resulted in last month’s guilty verdict.

While Sollecito received a 25-year sentence, this was upped to 28 years and six months for Knox because she wrongly accused Lumumba of murdering Kercher.

Full audio of the police interrogation will be aired in the UK this evening, as part of the BBC Three documentary, Is Amanda Knox Guilty?

As Knox and Sollecito appeal their latest conviction, local drug dealer Rudy Guede is currently the only person jailed for the murder.

Manuela Comodi, a lawyer for the prosecution, told the BBC it is impossible he could have stabbed Kercher to death alone.

“One person couldn’t – at the same time – hold Meredith still and hold back her hands, because there are very few defensive wounds…and to inflict those wounds with a smaller knife, and then give her the fatal blow with the larger knife, is impossible. Not even superman could do it,” Comodi said.

Another prosecution lawyer, Giuliani Mignini, said Knox “wanted to make Meredith pay” for being critical of the American’s liberal attitudes to sex.

But Anne Bremner, from the group Friends of Amanda, said: “There’s not one piece of physical evidence to link this girl to this crime.”

Knox’s DNA was on a knife found at Sollecito’s home, said by prosecutors to be the murder weapon although no traces of Kercher’s DNA were found on it.

More than six years after the crime, the victim’s brother Lyle Kercher said his family had struggled to cope with the ordeal.

“Anybody losing anyone close is hard, losing someone so young and the way we did is obviously 100 times worse, and on top of that to have all the media attention that has gone for so long makes it very difficult to cope with,” he told the BBC.

As Knox and Sollecito stay out of prison during their appeal, Lyle Kercher said the January verdict was “not the end” and rather “another chapter moving things forward”.

His sister Stephanie said the family were still seeking closure: “Just having an end of the Italian justice system and knowing that's the final decision, and then we can start to remember just Meredith.”

She recalled “everything that Meredith must have felt that night,” when she was stabbed to death at her apartment in Perugia, speaking of “the fear and the terror and not knowing why”.

Stephanie said her sister “fought” to come to Italy, despite being nervous ahead of the move. “I just remember her suddenly crying and saying that she was going to be sad to go but she was excited to come,” she told the BBC.

Since the murder, Perugia’s University for Foreigners has set up a scholarship to support British students wanting to go on exchange. The Kercher family has also set up a trust fund for their own legal case, which they plan to use to help others in similar situations in the future.