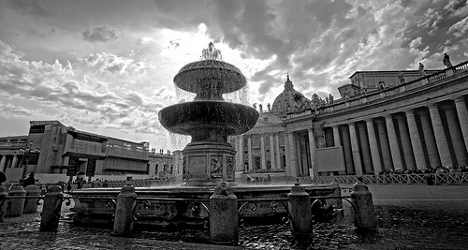 The closed-door talks were taking place at St Martha's, the Vatican City residence normally reserved for visiting clergymen where Francis has lived since he was elected in March last year instead of the papal palace.

The council on Tuesday will hear a report from a new committee of experts set up by the Pope to reform the Vatican bank, formally known as the Institute for Religious Works, or under its Italian acronym IOR.

On Wednesday, the council – dubbed the "G8" – will discuss "organizational and economic programmes of the Holy See", Vatican spokesman Federico Lombardi said.

Among the items on the agenda will be the streamlining of the administration of the church by merging different pontifical councils and the creation of a new "ministry" dealing with lay issues, the i.Media news agency specializing in Vatican affairs reported.

I.Media said the planned reforms have generated "palpable tension" in the Roman Curia, the central administration of the church, which includes some 20 dicasteries (departments) and employs around 2,000 people.

The council of cardinals, which held its first meeting in October, is made up of eight senior clerics from Australia, Chile, Democratic Republic of Congo, Germany, Honduras, India, Italy and the United States.

The Pope's busy week continues on Thursday and Friday with a meeting of cardinals from around the world – known as a consistory – to discuss family issues.

Then on Saturday, Francis will formally appoint 19 new cardinals – the first of his pontificate.