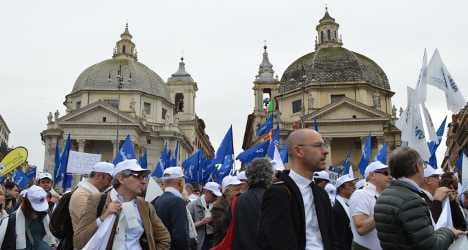 Tens of thousands of people gathered in Rome’s Piazza del Popolo on Tuesday; a collective army of business owners demanding the government do more to stem the worrying rise in bankruptcies.

“Without business there is no Italy,” was the slogan of the day, organized by the Italian Enterprise Network (Rete Imprese Italia) along with a number of business associations.

Among a series of demands was an overhaul of the tax system, often described as a barrier to growth with such high rates many Italians simply evade their tax duties.

Those businesses that can survive are often hit with further barriers, he said: "We'd like to take on young staff, but there's too much bureaucracy.”

Despite efforts by the reform-driven governments of Enrico Letta, who resigned as prime minister last week, and his predecessor Mario Monti, Italian businesses are still falling behind their European neighbours.

Protester Domenico Giovini, from Modena in central Italy, likened the Italian case to that of a workhorse: "Winston Churchill said enterprise is a sturdy horse pulling the wagon. The Italian horse is strong but it is tiring, it only has a little bit to eat.”

Italy relies heavily on the success of its 3.7 million small- and medium-sized businesses; according to EU estimates almost half the country’s jobs are in companies with fewer than ten employees.

"We don't have a history of big businesses, this is a good thing," said Chiara Primerano at the Rome protest, highlighting the success of the “Made in Italy” brand. But she, like the thousands of protesters in Rome, are worried about its survival: “If the government kill this, there's nothing left.”

IN PICTURES: Tens of thousands of business owners protest in Rome