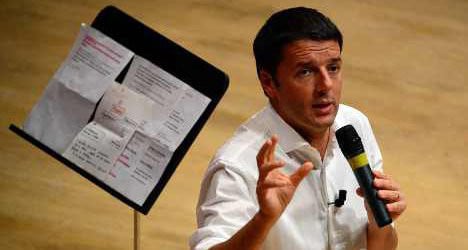 The 39-year-old would be the European Union's youngest prime minister if he succeeds. Photo: Olivier Morin/AFP

The 39-year-old mayor of Florence, who would be the European Union's youngest prime minister if he succeeds, will hold two days of meetings with leaders of most of the political parties represented in parliament.

As the political talks got under way, thousands of small business owners rallied in Rome to call for "concrete and rapid" action by the government after a devastating two-year recession.

"Businesses have been waiting too long for a recovery that never seems to come," said the rally's organizers, Rete Impresa Italia.

Low demand and high taxes "risk provoking a further impoverishment of families and an alarming growth in unemployment," the association of business owners said in a statement.

Renzi accused Letta, who was only in power for 10 months following inconclusive elections in 2013, of failing to live up to ambitious reform pledges.

After receiving the nomination on Monday, Renzi vowed to overhaul labour laws, boost education, cut taxes, streamline parliament and reform the electoral system in his first few months in power.

Christian Schulz, senior economist at Germany's Berenberg Bank, said in a note for investors that the labour market reform had "the biggest potential to lift Italy's anaemic trend growth rate."

"It is early days but so far Renzi's appointment carries more hopes for positive change than risks of a lapse into old bad habits of ineffectual backroom power broking for Italy," he said.

The financial markets have been upbeat about the prospects of a Renzi government, with Italy's borrowing costs falling and stocks rising.

Renzi has said he wants his government to rule until the next scheduled elections 2018 — an ambition that analysts have dismissed given the divisions between Italy's bickering politicians.

"He will have to display his qualities and overcome his weaknesses because his first time is perhaps our last hope," said Beppe Severgnini, a columnist for the top-selling Corriere della Sera daily.

Renzi's meteoric rise is also being watched closely by other centre-left parties in Europe, where the left has been on the defensive in many countries.

The web-savvy Renzi has been the mayor of Florence since 2009. He has enjoyed a lightning career that catapulted him to the leadership of his party in December and now one step from the premier's seat.

Going in his favour in the eyes of Italians are his hands-on local experience and the fact that he has never been in parliament or national government, which have been deeply discredited by scandals.

If his coalition talks succeed, Renzi will have to formally accept the nomination from President Giorgio Napolitano, before the new government can be sworn in and be voted into power by parliament.

Analyst predictions of when that could happen range between the end of this week and early next week but it all depends on the coalition talks under way.

Asked on Tuesday when he thought there could be a new government, top Renzi ally and former minister Graziano Delrio said "by the end of the week".

Federico Geremicca, a columnist for La Stampa, said: "The young mayor and party leader knows that he is not just expected to deliver a government but much more. A turnaround. A revolution."

SEE ALSO: Why Italy's 'palace coup' is bad for democracy