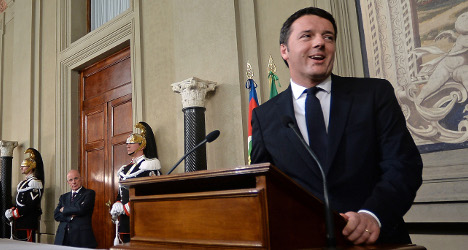 Almost half Italians polled said they had "little or no confidence" in a government led by Matteo Renzi. Photo: Filippo Monteforte/AFP

Sixty-five percent described Renzi's abrupt ousting of Enrico Letta at the helm of the leftist Democratic Party as a "blow to democracy", according to a poll published Wednesday in La Stampa daily.

Only 26 percent of the 509 people questioned said it was a "normal" change in government, the poll conducted by the Institut Piepoli found.

Renzi, 39, is currently in talks to try to form a new coalition government after being nominated prime minister designate on Monday.

He said on Wednesday he intends to formally accept the position of prime minister on Saturday, ahead of a confidence vote in his new government.

The prime minister-designate, who has been holding coalition talks with amdozen parties this week, said that after accepting his nomination by the president he intends to "come before parliament from Monday" for his government line-up to be voted into power by the upper and lower houses.

The current mayor of Florence, who will become the European Union's youngest prime minister when he takes up office, has pledged rapid reforms to get the eurozone's third largest economy moving again.

But the poll found that 49 percent had "little or no confidence" in a Renzi government, against 46 percent who were "quite or very" confident.

Renzi's coalition negotiations are set to wrap up on Thursday and he is expected then to submit his cabinet lineup to President Giorgio Napolitano before the government is sworn in and voted into office by parliament.

SEE ALSO: Why Italy's 'palace coup' is bad for democracy