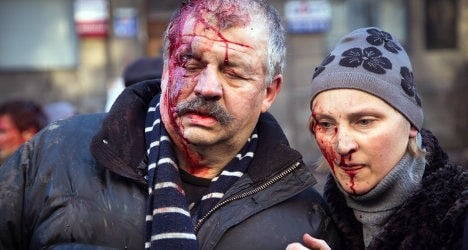 Bonino said after Ukraine crisis talks in Brussels with her EU counterparts that the sanctions would be imposed "very rapidly in the next hours."

She said EU nations also agreed to offer medical assistance and visas to the injured and to dissidents.

The decision to impose sanctions was taken in agreement with three EU envoys currently in Kiev, the foreign ministers of France, Germany and Poland, Laurent Fabius, Frank-Walter Steinmeier and Rodoslaw Sikorski.

The three had several hours of talks with President Viktor Yanukovych as well as with the three main leaders of the opposition.

Diplomats said the ministers meeting in Brussels had also agreed to suspend the export of anti-riot equipment.

The violence in Kiev has killed at least 28 people and injured more than 200.

Tens of thousands of Ukrainians have braved sub-zero temperatures in recent weeks to oppose President Yanukovych’s closeness to Russia, which is perceived as isolating the country from its European neighbours.

The escalation of violence amounted to a “concrete risk of civil war, at the threshold of the European Union,” Bonino said in a statement on Wednesday.