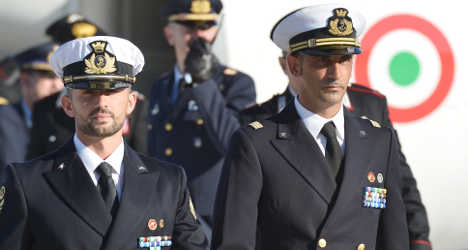 The Times of India, an English-language daily, said the anonymous letter contained a number of threats on the case, which has been ongoing since 2012.

The threats were confirmed by Syed Akbaruddin, a spokesman for the Indian government, on Friday, ANSA new agency reported.

"We have asked Italian authorities to ensure the protection of diplomatic staff,” he said, adding that "we are sure our Italian friends will guarantee the safety of our diplomats."

Italy on Tuesday recalled its ambassador to India in protest over a delay in court proceedings against the two marines, who are accused of killing two Indian fishermen they mistook for pirates while guarding a cargo ship in 2012.

An Indian Supreme Court hearing scheduled for the same day was immediately postponed because prosecutors are still waiting for the Indian justice ministry to decide which law to try the case under.

Attorney General Goolam Vahanvati has requested the pair be prosecuted under a maritime security law, which attracts a 10-year sentence, and on Tuesday said the matter was "under the consideration of the law ministry" and he needed "more time to work out a solution to the issue".

The next hearing will be on February 24th.

The two marines, Massimiliano Latorre and Salvatore Girone, are staying at the Italian embassy in New Delhi.

Italian authorities have lobbied the European Union and the United Nations on the case, saying Latorre and Girone should be tried in Italy because it says the incident took place in international waters.

India denies this, saying it happened in Indian waters.

Girone's wife, Vania Ardito, told ANSA earlier this week that the latest delay was "an injustice".

"We are tired of waiting. Massimiliano and Salvatore are innocent and it is time they came home," she said.