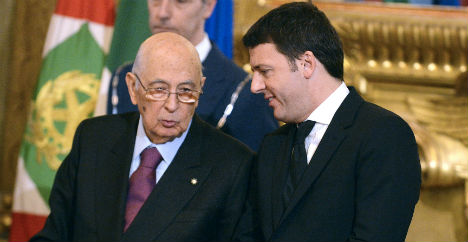 The former mayor of Florence was accompanied by his wife and three children — dressed in the colours of the Italian flag — to the formal ceremony in Italy's presidential palace, and smiled widely as he watched his new team sworn in by President Giorgio Napolitano.

The centre-left leader takes over the reins of the eurozone's third largest economy in a period of increasing frustration among ordinary Italians hard hit by a deep recession and weary of broken political promises.

In his 16-strong cabinet, half of the new ministers are women and — with an average age of 47.8 years — it is the youngest government in Italy's history.

Renzi is "gambling on freshness, newness and energy", but "doubts must be raised over the government's experience and ability to have a bearing on the worst post-war economic crisis Italy has known," said political watcher Mario Calabresi in La Stampa daily.

European partners will be watching closely to see whether the 39-year-old can revolutionise the halls of power after ousting his predecessor Enrico Letta for failing to enact reforms in a country often perceived as stifled by corruption and bureaucracy.

The new prime minister had made it clear he was reluctant to keep a team that worked with Letta, but many analysts expressed surprise over the former Florence mayor's decision to change the majority of posts, including key offices such as foreign minister.

"Renzi seems to be betting everything on himself, on his political energy," editorialist Ezio Mauro for La Repubblica daily said, while Marco Travaglio in Il Fatto Quotidiano described the new cabinet as "a boiled chicken soup which disappoints even the most lukewarm expectations."

Most political watchers agreed that Renzi's best decision was to give the key post of finance minister to Pier Carlo Padoan, the chief economist at the Organisation for Economic Cooperation and Development (OECD).

"He is an expert, with a renowned political sensibility, appreciated and valued in Europe and international forums," said Stefano Folli of Il Sole 24 Ore.

"Italy's credibility will rest almost entirely on his shoulders,
representing both the newness of the Renzi government but also continuity with the things that matter," he said.

Italy is struggling to reverse the effects of a deep recession and is lumbered with a public debt equivalent to 130 percent of total economic output.

The unemployment rate stands at a near record 12.7 percent, with joblessness at 41.6 percent among the young.

Accepting the role of prime minister on Friday after three hours of talks with president Giorgio Napolitano, Renzi spoke of the "responsibility, delicacy and extraordinary honour which comes from creating a government capable of bringing hope."

The former Boy Scout's diplomatic skills are likely to be sorely tested by his centre-left and right coalition government — as well as a need to keep on his side ex-premier Silvio Berlusconi, whose Forza Italia party will be in opposition but will be key to pushing through reforms.

"It doesn't just depend on Renzi. Berlusconi holds in his hand the second majority, the power to push through reforms", the Corriere della Sera daily said.

Many political observers said that, should Renzi fail, it would likely open the door to the anti-establishment Five Star party.

"The acrobat is on the high wire, alone and without a safety net. Let's hope he manages: otherwise the only thing that remains are the populist clowns," La Repubblica said.