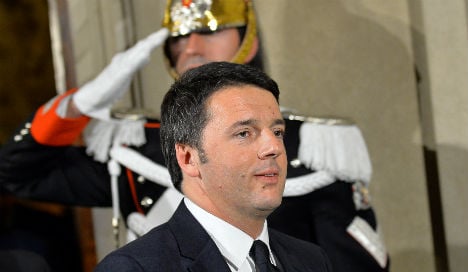 Here are some of the key names of the centre left-right coalition members tasked with tackling the ills created by a deep recession in the eurozone's third largest economy.

The 39-year-old, the European Union's youngest prime minister, is a former Boy Scout who has never been in national government or parliament.

— Angelino Alfano, Interior Minister, was deputy PM and interior minister under Letta, dedicating himself in particular to the fight against organised crime, and heads up the New Centre Right (NCD) party, one of the government's coalition partners.

Born in 1970, he was the right-hand man to Silvio Berlusconi for many years. He made his name as the architect of a law intended to shield Berlusconi from prosecution, but broke all ties with the media magnate at the end of last year.

— Federica Mogherini, Foreign Minister, is a expert in European relations.

Born in Rome, the 40-year-old studied the relationship between Islam and politics and was responsible for international relations within the PD.

Previously an economics professor at Rome's La Sapienza University, the 63-year-old has served as the Italian executive director at the International Monetary Fund (IMF), where he was also in charge of European Co-ordination.

According to Italian media reports, he was chosen as part of a deal made between Renzi and Berlusconi, as presenting little threat to the media magnate, whose legal troubles have been hindering his political career.

— Roberta Pinotti, Defence Minister, was the first woman to hold the position of president of the Defence Commission in the lower house of parliament.

The 53-year-old has focused on framework legislation on international missions and banning cluster bombs.

The 58-year-old made her name as a fierce anti-mafia campaigner, who took on the notorious 'Ndrangheta clan.