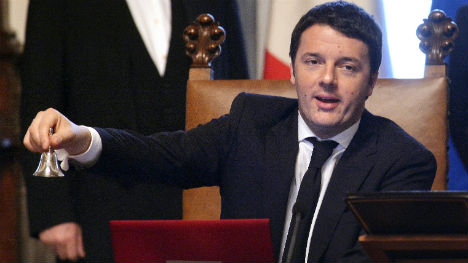 The 39-year-old Renzi, who was sworn in on Saturday and faces confidence votes in parliament this week, promised a "surprise" on the digital economy and said he would try to "cut taxes".

"This is my strongest responsibility: an Italy of opportunity, not rent-seeking," he told one follower who asked him not to "disappoint the young people of your age… you have given hope to."

Renzi is a web-savvy politician who has promised rapid reforms to get the economy moving after two years of recession that have raised unemployment to
record highs.

He has 850,000 followers on a Twitter account that on Sunday still referred to him as "mayor of Florence and general secretary of the PD" — the ruling centre-left Democratic Party.

Renzi said he was at home with close aide Graziano Delrio, another former mayor of Reggio Emilia in central Italy who holds the key post of secretary of state in the new cabinet.

Renzi has maintained a very public presence on Twitter during his rise to power, often responding personally to queries.

As journalists waited impatiently for him to formally accept the nomination from President Giorgio Napolitano on Friday, Renzi tweeted: "I'm coming, I'm coming".

On Saturday, just before the swearing-in ceremony, he thanked his followers for their messages of support and added: "The task is difficult but we are Italy, we will manage. Our commitment: to be ourselves; a free and simple people".

After sending a few tweets on Sunday, however, Renzi wrote: "I'll stop there. Otherwise I will spend my Sunday on Twitter instead of on the main issues".

But he promised this week to continue with his #matteorisponde (#matteoreplies) — an exchange that he began during his campaign for the party leadership.