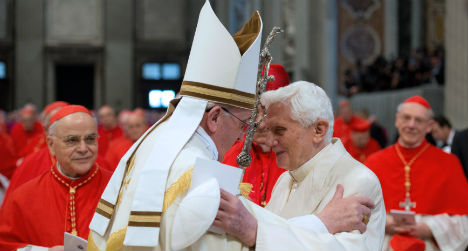 Pope Francis is greeted by Pope emeritus Benedict XVI as he leaves after appointing new cardinals at the consistory in the Saint Peter's Basilica at the Vatican. AFP Photo / Osservatore Romano

The new cardinals were presented with scarlet-red birettas and gold rings at a grandiose ceremony in St. Peter's Basilica that Vatican observers say should help correct a perceived bias towards European cardinals. Nine of the 19 cardinals appointed on Saturday came from South America, Africa and Asia.

Former pope Benedict XVI, who last year became the first head of the Roman Catholic Church to retire since the Middle Ages, joined the cardinals in the front row of the basilica.

The 86-year-old seemed cheerful as he sat cloaked in his white papal garments in the midst of the red-robed cardinals. He and Francis hugged at the start of the ceremony and shook hands warmly at the end.

Sixteen of the 19 cardinals are under the age of 80 and can therefore take part in the secretive conclave that elects new popes from among their ranks.

In an indication of the importance the developing world holds for the Argentine pope — a fierce critic of economic inequality — half are non-Europeans, including five cardinals from South America, two Africans and two Asians.

Francis, in a cream mantle embroidered with gold, called on the new cardinals to be "peacemakers, building peace by our hopes and our prayers".

The 77-year-old called on the new cardinals to show "compassion, especially at this time of pain and suffering for so many countries throughout the world".

Francis, the first non-European pope in nearly 1,300 years, also bestowed the honour of the red cap on the archbishops of Buenos Aires in Argentina, Rio de Janeiro in Brazil, Santiago in Chile, Managua in Nicaragua and Les Cayes in Haiti.

Aurelio Poli, 66, took over the post of Buenos Aires archbishop from Francis, who was a regular visitor to the city's slums before he became pope almost a year ago.

Chibly Langlois, 55, is the Church's first cardinal from Haiti, one of the poorest countries of the world.

Langlois said all in his country, "of all confessions, welcomed… the great concern shown by the pope" in appointing him.

According to Vatican watcher John Allen, Francis is taking the idea of privileging the periphery even further, by choosing Haiti over the region's three Catholic powerhouses — Cuba, Puerto Rico or the Dominican Republic.

For Africa, the new electors were the archbishops of Ouagadougou in Burkina Faso and Abidjan in Ivory Coast, while Asia was represented by the archbishops
of Cotabato in the Philippines and Seoul in South Korea.

Cardinal Jean-Pierre Kutwa of Abidjan was greeted by women singing "halleluja" and by imams. He said his appointment was "a wink the pope made towards peace" in his country.

The cardinal for Ouagadougou, Philippe Ouedraogo, said the pope "has brought the gospel to us".

The pope's choices echo his desire to emphasise the pastoral side of the Church — choosing for the most part leaders engaged with the problems affecting their local communities rather than favouring administrative heads.

Only four are members of the Curia — the Vatican's government — including Italian Pietro Parolin, 58, the new secretary of state, as well as German Gerhard Mueller, 66, who heads the Vatican's doctrinal congregation.

Among the most prominent in the group is Britain's Vincent Nichols, the 68-year-old Archbishop of Westminster, who has been likened to Francis for his
determination to speak out for the marginalised.

Just a week before the Vatican ceremony, he waded into British politics to condemn welfare cuts and is best known for winding up the Church's conservative arm in 2010 by defending London masses for gay and transgender Catholics.

Nichols was joined by Gerald Lacroix, the lord archbishop of Quebec in Canada and one of the youngest electors to be chosen at the age of 56.

The oldest "new prince" is Loris Francesco Capovilla, the 98-year-old former secretary to pope John XXIII, who did not attend because of his reduced mobility but is likely to receive his red cap at home.