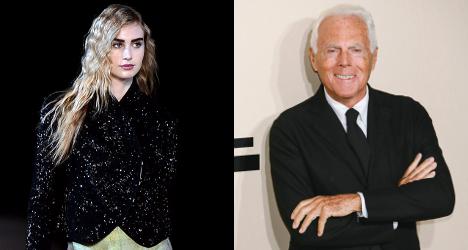 Italy's 79-year-old fashion king bowed and applauded at the end of his catwalk show, which featured a colour palette of greys and blacks set off with lime-coloured linings, top pockets and trouser stripes.

Trouser suits and jackets were roomy – a key trend during the autumn/winter 2014-2015 fashion week collections this year, which have also been filled with opulent furs, global nomad looks and bold colours.

DSquared2 also showcased their latest designs on Monday with an eccentric show set in an insane asylum that included an actual pillow fight and where the designs were part sado-masochist, part 1960s glamour.

As the celebrity parties and behind-the-scenes transactions wound down in Italy's fashion hub, two reported business deals were the talk of the town.

The investment, which the report cited its sources as saying would include a "significant" minority holding in the label and the possibility of increasing the stake in future, has been rumoured for months.

Backstage after his own show on Sunday, de Vincenzo spoke as if it were already a done a deal, saying: "Now I can be calmer from the point of view of production because if you are on your own the risks increase".

But there was no official confirmation from LVMH (Moet Hennessy Louis Vuitton), which owns Bulgari, Dior, Fendi, Loro Piana and Marc Jacobs among others.

Sicily-born de Vincenzo, who moved to Rome to attend the European Design Institute at 18 and worked as an accessories designer at Fendi, is best known for his experimental use of fabrics and geometric patterns.

De Vincenzo, who made his Milan debut in 2009, again showed his focus on material with Sunday's collection, which included dresses in Lurex – a sparkling yarn – and pleated skirts that opened to reveal metals.

The label said in a press release that the collection "continues to explore motifs that deceive the eye to create personal paths in design", with materials that are "manipulated, sliced, engraved, embossed, embroidered and fused to the point of transfiguration".

Another deal making waves was the reported purchase of Krizia, one of Italy's first ready-to-wear brands, by Chinese retailer Shenzhen Marisfrolg Fashion Co.

Women's Wear Daily said Shenzhen Marisfrolg owner Zhu Chongyun would become Krizia's new chairman and creative director and the company would continue to be based in Milan.

The plan is to revamp the brand over the next five years by opening Krizia flagship stores across China, in Beijing, Shanghai, Guangzhou, Shenzhen and Chengdu, the trade journal said.

Mariuccia Mandelli, who founded the label in 1954, was quoted as saying she was "delighted" to have found a worthy successor who has "strength and talent and is willing to lead Krizia's international growth".

Krizia made its catwalk debut at Florence's Palazzo Pitti in 1964 and at its peak in the 1990s, it had a global network of stores and licence agreements.

Contacted by AFP, Krizia said it was unable to confirm or deny the report.

China is a major market for Italian luxury brands, and Chinese firms have shown growing interest in investing directly in Italy. Design by Shanghai, which promotes Chinese fashion designers internationally, has also given its backing to Uma Wang, who showcases in Milan.

Wang's collection on Saturday was inspired by mediaeval tradition and featured ultra-lightweight garments made of Chinese paper processed in Italy.

"Mine is a continuous journey from East to West. It is a free movement on a long road that leads to Italy," Wang told reporters backstage after the show.