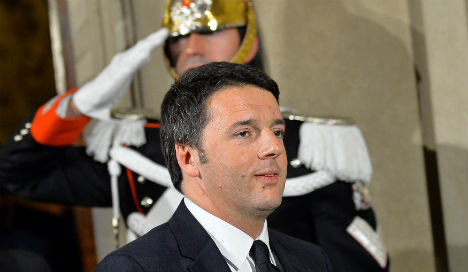 The new premier called for a "radical and immediate change" in Italy in an impassioned speech on Monday. Photo: AFP/Andreas Solaro

The new premier said there were no excuses for failing to tackle the recession-hit country's ills and told senators Italy would become a "country of opportunity" in a largely ad-lib speech ahead of a confidence vote in the upper house of parliament.

"If we lose this challenge the fault will be all mine. No-one has an alibi anymore," said the 39-year-old — Italy's youngest ever prime minister.

"This is an Italy of possibilities, an Italy of fundamental change," he said, stressing the "urgency" of implementing reforms in "a rusty country…gripped by anxiety".

Renzi, who grasped power after helping oust his predecessor Enrico Letta over failures to do enough to boost a flagging economy, reiterated plans for rapidly overhauling the tax system, job market and public administration.

Telling the personal stories of specific individuals — including a jobless father and a man killed by a reckless driver — he pledged to review unemployment benefits, establish a guarantee fund for small companies and comprehensively reform the justice system.

He also promised to cut the tax burden by a double-digit figure by the first half of 2014 and pay off public administration debts.

The confidence vote later Monday will be a key test of Renzi's power to unite warring factions in Italy's parliament and secure a solid majority.

The former mayor of Florence is expected to win based on the support of his own centre-left Democratic Party (PD) and his coalition partners — the centrists and the New Centre Right (NCD) party.

Political analysts will however be paying close attention to the size of the majority he manages to secure, as an indication as to whether the new government has a chance of living out its mandate until 2018 or whether the country will end up back at the polls.

"We are not afraid of going to the polls," Renzi said.

Former premier Silvio Berlusconi's Forza Italia (FI) party is in opposition, although it has agreed to support key decrees on a case by case basis.

The anti-establishment Five Star movement — Italy's other main opposition party — has slammed Renzi for stealing the top job and called for immediate elections, and some political watchers say Renzi's failure could significantly boost their numbers.

A bold-faced Renzi stared down critics hollering insults from among the movement's benches and spoke out against populism and for Europe.

He said Italy must tackle its towering public debt — equivalent to 130 percent of total economic output — not because German Chancellor Angela Merkel has called for it, but because "it is our duty to, for our children's sake".

He spoke of the need for greater transparency — making public spending receipts available online — and of the need to attract foreign investors and shake off the image of Italy "as just a great holiday destination".

Renzi's insistence on speed has impressed some analysts, who say it may help him avoid getting stifled under the weight of Italian bureaucracy.

"By keeping up the momentum, Renzi is increasing the chances of these important reforms going through despite likely resistance from various camps," Christian Schulz, senior economist at Berenburg, said in a note.

"Much will depend on the concrete reform proposals and how they will be watered down in the inevitable political wrangling afterwards," he said.

But Chiara Corsa and Loredana Federico from Unicredit asked "whether the Renzi government is strong enough or sufficiently 'revolutionary' to implement the reform agenda".