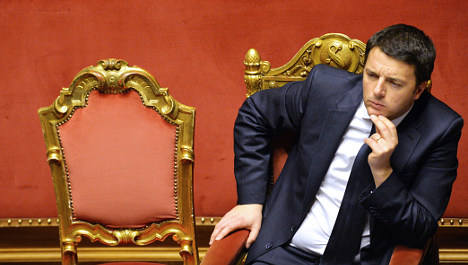 Matteo Renzi gesures as he delivers a speech during a debate for a confidence vote at the Italian Senate on February 24th. Photo: Andreas Solaro/AFP

In an energetic and impassioned speech to parliament, Italy's youngest-ever premier reiterated plans for rapidly overhauling the tax system, jobs market and public administration in a bid to tackle the country's ailing economy.

"If we lose this challenge the fault will be mine alone. No-one has an alibi anymore," the 39-year-old said as his fiery speech prompted jeers and insults from opposition benches.

"This is an Italy of possibilities, an Italy of fundamental change," he said, stressing the "urgency" of implementing reforms in "a rusty country…gripped by anxiety".

Renzi, who grasped power after helping oust his predecessor Enrico Letta over failures to do enough to boost a flagging economy, later won the vote of confidence, with 169 votes in favour and 139 against, according to Senate speaker Pietro Grasso.

In his speech, he pledged to review unemployment benefits, establish a guarantee fund for small companies and comprehensively reform the justice system.

He also promised to cut the tax burden by a double-digit figure within months and pay off public administration debts.

But small business association Confartigianato wondered where the prime minister hoped to find the money for the reforms, with its head Giorgio Merletti saying "a couple of quick sums show that there is €100 billion to find immediately".

The former mayor of Florence had been expected to win the confidence vote based on the support of his own centre-left Democratic Party (PD) and his coalition partners – the centrists and the New Centre-Right (NCD) party.

He must now face a confidence vote in the lower house of parliament late on Tuesday.

Political analysts will however be paying close attention to the size of the majority he manages to secure, as an indication as to whether the new government has a chance of living out its mandate until 2018 or whether the country will end up back at the polls.

"We are not afraid of going to the polls," Renzi said.

US President Barack Obama spoke to Renzi on Monday, the White House said, adding that the two leaders would meet in March in Rome.

Obama expressed support for "Renzi's leadership on creating economic growth and jobs, and he looks forward to continued close US-Italian partnership on Afghanistan, Libya, the Transatlantic Trade and Investment Partnership, and security and defense cooperation," the White House said in a statement.