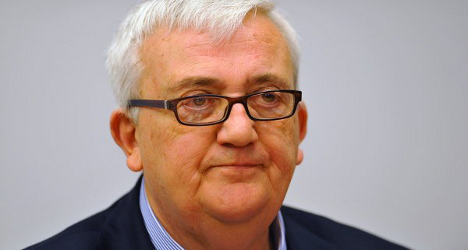 Strasbourg was debating the EU's position on Switzerland in light of the recent referendum. Photo: Andreas Solaro/AFP

Strasbourg was debating the EU's position on Switzerland in light of the recent referendum when Italian deputy Mario Borghezio made his protest.

Brandishing a Swiss flag, Borghezio, who is a member of the populist, anti-immigration Northern League, interrupted the debate by shouting: "Yes to the referendum! Yes to the people's freedom!

"Enough of European dictatorship over the people!" he added in Italian and French, before being sternly asked to leave the chamber.

Swiss newspaper 20 Minuten said Borghezio's actions were provoked by a previous speech by infamous German politician Daniel Cohn-Bendit – known as Dany le Rouge from his time as a leader of the Paris student uprisings of 1968 – who is reported to have said "The Swiss want to have their cake and eat it too."

Following the Italian MEP's outburst, a war of words broke out between Cohn-Bendit, the parliamentary leader of the Green party, and Bruno Gollnisch, a member of France's far-right National Front.

"I'm full of admiration for his intelligence and full of humility for my own cretinism," Gollnisch shot back sarcastically.

Cohn-Bendit later predicted the Swiss would "come back on their knees because they need Europe", saying 60 percent of Switzerland's exports go to the European Union.

The incident reflects the split reaction in Europe to the Swiss vote. While most MEPs have criticized Switzerland's decision to limit immigration from the EU, some right-wing politicians have supported the country.

During Wednesday's session Belgian MEP Philip Claeys said the EU's criticism of the Swiss referendum showed its authoritarian nature, reported the BBC. "The vote had nothing to do with xenophobia, it is a return to common sense," he said.

Others emphasized that the free movement of people is a fundamental pillar of the EU and the introduction of quotas for foreigners in Switzerland is not acceptable.

In retaliation, the EU has suspended talks with Switzerland over its participation in EU research and education programmes, reports the BBC.

Greek deputy foreign minister Dimitris Kouroulas said the EU should "stand by our own principles and not give way to a pick and choose approach to European integration."

Cohn-Bendit stressed the need for Switzerland to find its own solution to the situation, rather than looking to the EU.

"The Swiss will come back to us on their knees when they need us," he added.

It's not the first time Italian MEP Borghezio has caused unrest, reports 20 Minuten. Last June he was accused of insulting an Italian colleague of Congolese origin, while he has previously expressed sympathy for Anders Behring Breivik, the Norwegian extremist responsible for the murder of 80 people in 2011.