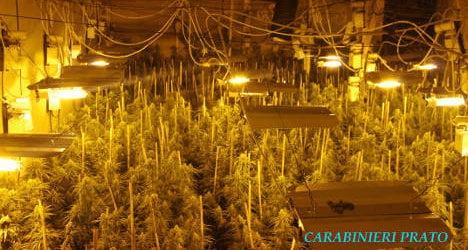 Part of the cannabis farm found by police in Tuscany. Photo: CC Prato

Police on Thursday uncovered an “enormous” haul of cannabis in Tuscany, seizing 5,000 plants and arresting a Chinese gang accused of being behind the drug factory.

The overnight raid took place in Vaiano, north of Prato, uncovering what police described as an “industrial cultivation of cannabis”.

Six Chinese men and one woman were arrested at the warehouse, some of whom were still tending to their cannabis crop when police arrived.

The sweep uncovered an “enormous quantity of cannabis plants,” police said, with 5,000 plants being warmed by 200 lamps.

The sophisticated operation included a ventilation and humidification system, with plants divided by different stages of growth.

An extensive selection of gardening equipment was also found at the site, to maintain the plants, in addition to scales to weigh the finished product.

The gang also made use of a living room, kitchen and bedroom fit for three people, police said in a statement.

Their production line was masked by black plastic bags and cloths used to cover the warehouse windows, but the plan began to unfold when police arrested some members of the group who were found in possession of cannabis-growing equipment.

The subsequent surveillance operation and broader investigation led police to the Vaiano factory, bringing the total number of arrests to 17.