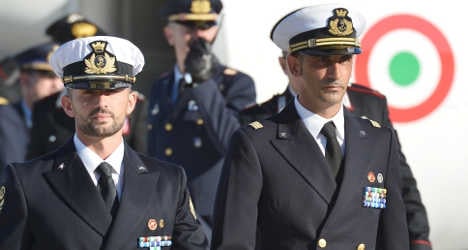 Latore Massimiliano and Salvatore Girone, both Italian marines, were serving as security guards on board an Italian-flagged Enrica Lexie cargo ship in 2012. Photo: Vincenzo Pinto/AFP

Latore Massimiliano and Salvatore Girone, both Italian marines, were serving as security guards on board an Italian-flagged Enrica Lexie cargo ship in 2012.

Spotting what they claim they thought was a pirate ship, they fired their guns. Unfortunately, it was a fishing boat, and their volleys allegedly killed Jelestine and Ajeesh Pinku.

Not exactly. The marines claim it was all a tragic accident: they’d genuinely thought the boat contained pirates, and they’d fired only warning shots.

But their version of events was disputed by the Indian authorities who claimed the fishermen were unarmed.

The second issue is the location of the shooting. While India asserts that the killings took place in waters off Kerala that are under its jurisdiction, Rome insists that both boats were in international waters.

Tension escalated after the marines, by then under arrest in India, were granted permission to return home to vote in the Italian elections last spring – and then didn’t go back.

In retaliation, India banned Italy’s envoy Daniele Mancini from leaving the country, despite his right to diplomatic immunity.

Eventually, Italy backed down, and the marines were sent back to stand trial – on the understanding that their “fundamental rights” would be respected.

To add fuel to the flames, last August four Italian marines who were also aboard the Enrica Lexie at the time of the shooting were summoned to give evidence at the trial but refused to travel to India.

So what’s the problem now?

Since the incident two years ago, the trial has been subject to numerous delays. And, last week, Italy recalled its ambassador to India in protest over the Indian Supreme Court’s decision to delay court proceedings yet again.

There was also fury in Rome when it was announced that the men would be tried under India’s anti-piracy laws, which carry the death penalty.

The Indians appeared to be intransigent. On Sunday, Indian Defence Minister A.K. Antony insisted: "There will be no compromise. We are not going back in any way in the case. We are going ahead with the case as per Indian laws."

With India and Italy in deadlock, the diplomatic row threatened to escalate even further.

Then, on Monday, India suddenly announced that it had dropped plans to prosecute the pair under India’s anti-piracy charges.

"The honourable law minister has recorded his opinion that provisions of the SUA Act (maritime and anti-piracy act) are not [suitable] in this case," India’s Attorney General Goolam Vahanvati told India’s top court.

But tensions are still simmering. Last week, a package containing a single bullet was sent to the Indian embassy in Rome, leading to a security alert.

"We have asked Italian authorities to ensure the protection of diplomatic staff,” said a spokesperson for the Indian government.

While they await trial, the marines are living – and working – at the Italian embassy in New Delhi.

According to Indian Attorney General Goolam Vahanvati, they will now be charged with offences under the country's criminal code, which could lead to charges of murder.

But the Italian marines shouldn’t expect a decision anytime soon. The case will again be delayed while the court examines whether India's National Investigation Agency, which usually handles matters of national security, was the right body to have investigated the case.

And if it wasn’t?

The trial is likely to be delayed even further.