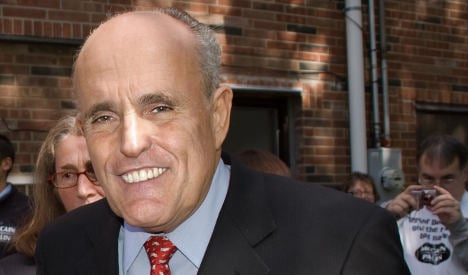 Giuliani, the grandson of Italian immigrants, went on to serve as city mayor from 1994 to 2001.

The plot was revealed by mafia informant Rosario Naimo, as part of evidence submitted to the Sicilian court investigating mafia-state relations.

Naimo claimed that when he was living in the US Riina sent one of his henchmen across the Atlantic to order the killing, Palermo Today said.

Riina’s interest in Giuliani stems from the future mayor’s relationship with Giovanni Falcone, an Italian magistrate who led a crack-down on the Sicilian mafia.

But whereas Giuliani survived the plot, with Time magazine in 2001 saying his anti-mafia work was turning him into a “national figure”, Falcone was gunned down in 1992.

Giuliani was stripped of his “dead man walking” status when Riina realized that US investigators had the power to completely destroy the Sicilian mafia, if the assassination took place, Palermo Today said.

Despite being imprisoned for over 20 years, Riina is still viewed as a danger in Italy. Just weeks ago he was recorded calling for the murder of Nino Di Matteo, the prosecutor leading the Palermo case, prompting the state to up its level of protection.