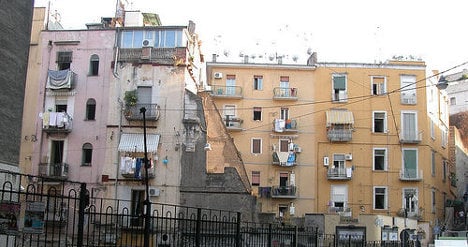 This is not the apartment mentioned in the story. File photo: James Canby/Flickr

Police made the shocking discovery at the home, described by the online newspaper ArticoloTre as being akin to a “landfill site”, on Friday.

The woman was found “curled up behind a sofa, semi-naked and trying to warm herself with a hair-dryer” and in a poor “physical and mental state”, Il Messaggero reported.

She was named by La Repubblica as Chiara, and is thought to have been kept in the apartment by her mother, named as Rosa Scargia, for eight years.

Her mother was arrested on Sunday but denies keeping her daughter in the flat against her will. She told police that Chiara was “free to leave” but had “refused all contact with the outside world”, adding that she “had a look of rage” whenever anyone, apart from her mother, entered the apartment.

Il Messaggero reported that Scargia would go to the apartment every few days, “leave a bag of shopping on the floor and then leave immediately”.

Police are also questioning three others – the building’s caretaker, the manager and the woman’s aunt, who lives close by.

A neighbour told La Repubblica that she had known the two women for 13 years.

“Chiara seemed to be a nervous person, with problems. We used to hear them arguing, and then it went silent,” the neighbour was quoted as saying.

“The windows were always kept shut and we thought Chiara didn’t live there anymore. But the smell started to get worse, and so we complained to the caretaker, after which the sad discovery was made.”

Chiara is being treated by doctors at San Giovanni Bosco hospital in Naples.