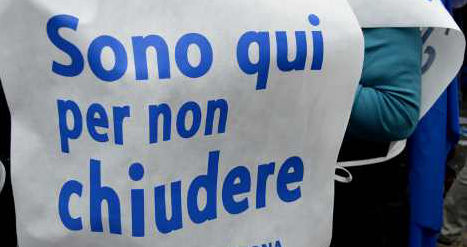 Despite Italy’s longest post-war recession ending in the third quarter of 2013, businesses are still struggling, with 7.3 percent more going bankrupt last year than in 2012, the figures from the Italy-based Cerved research agency show.

Businesses in the once-booming north-east of the country were the worst hit, the agency said.

"Unfortunately, we note that the year was distinguished by the highest number of bankruptcies since record-keeping began in 2001," Gianandrea De Bernardis, the research company's CEO said in a statement.

Thousands of Italian business owners took to the streets of Rome in February, calling on the government to do more to stem the rise of bankruptcies.

As his new government was sworn in last week, Prime Minister Matteo Renzi pledged radical reforms in the country’s job market and tax system, as well as cash for small businesses.

Giorgio Squinzi, the head of the Confindustria business lobby, last month called for a government “really capable” of tackling Italy’s ills and “providing answers” to a country “exhausted by a crisis which has lasted six years and which needs to recover as quickly as possible.”