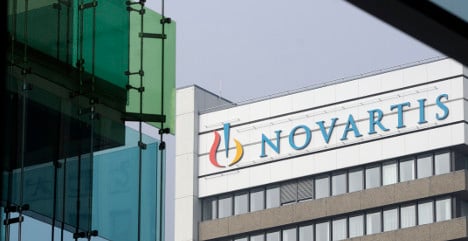 Swiss pharmaceutical giants Novartis and Roche have been fined for allegedly colluding on a drug sale. Photo: Sebastien Bozon/AFP

"The two groups made an illicit deal to prevent the use of a very cheap drug, Avastin, in treating the most widespread sight problem among the elderly and other serious eye diseases," the antitrust said in a statement.

The pharmaceutical giants did so "to benefit a much more expensive product, Lucentis, artificially differentiating between the two products," it said,
including by steering health services and doctors away from Avastin by describing it as more dangerous.

Both Roche and Novartis market Lucentis as the best medicine for the eye disease known as macular degeneration.

However, while Roche's Avastin is a cancer drug, a 2010 study found it was just as effective as Lucentis in treating the eye disease.

The result of their alleged collusion to blacklist Avastin as an eye cure was "a greater difficulty in treating many patients and a cost to the national health service estimated at around €45 million in 2012," the antitrust said, adding that increased future costs could exceed €600 million a year.

According to Italy's La Repubblica daily, Avastin costs "between €15 and €80, while Lucentis costs over 900 euros a dose".

Novartis said it "rejects the accusations of anti-competitive behaviour" and will appeal against the fine. In a note, it said that the factors limiting the use of Avastin in Italy "have nothing to do with Novartis".