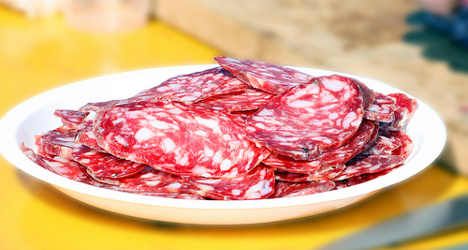 The farmer has been offering local produce to passersby in exchange for donations. Photo: Alfo23/Flickr

Cesare De Stefani was hit with the fine by the Montebelluna Inland Revenue (Fisco) office and accused of running a business “in the black”, La Stampa reported on Friday.

Each morning De Stefani opens up his “Osteria senza oste” (“Tavern without an innkeeper”), as it has become known, and lays the table with prosecco, salami, polenta biscuits, hard-boiled eggs and bread.

He then leaves the farmhouse, in the countryside near Santo Stefano di Valdobbiadene, and returns to clean and collect any donations that have been left.

Authorities argue that in doing so De Stefani is evading his taxes and should register with a company name, in order to legally offer his local produce to passersby.

But the innkeeper disagrees, saying that his farmhouse can hardly be considered a business.

“I’m not interested in the money but the joy of the people, who feel like they are at home,” he was quoted in La Stampa as saying.

De Stefani opened up his farmhouse back in 2005 – to those who could find it. The countryside inn is without a sign, leaving many people to enlist the help of locals to guide them there, La Stampa said.

The innkeeper himself never meets his guests, preferring to stay away “because having the owner at home changes people’s mood."

“But it’s as if I know everyone, because I read the messages left from the whole world: Argentina, Japan, England, Namibia, Porto Rico,” De Stefani added.