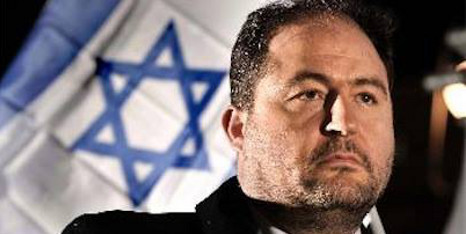 Tell us a bit about Riccardo Pacifici.

He was born in Rome in 1962, where he later attended the capital’s Jewish School. He was a salesman and also got involved in Jewish movements before becoming president of Rome's Jewish Communtiy in 1988.

He is the grandson of Riccardo Reuven Pacifici, who was chief rabbi of the Genoa Jewish Community.

His grandfather saved countless Jews before being captured in 1943 and sent to Auschwitz, where he died along with his wife, Wanda Abenaim, and other family members.

And why is he in the news this week?

On Wednesday, Pacifici gave a testimony at the trial of seven right-wing extremists, during which he revealed that a pig’s head was sent to his home.

The grisly package was received ten days after other pig’s heads were sent to Rome’s synagogue and Jewish museum in late January, a few days ahead of the International Commemoration Day in memory of the victims of the Holocaust.

The attack was denounced by Rome’s mayor, Ignazio Marino, as “despicable”.

As the hearing drew to a close, Pacifici is also reported to have got into a shouting match with one of the defendants from the Militia movement, Stefano Schiavelli. Schiavelli allegedly "verbally provoked" Pacifici in a way that prompted Pacifici to ask "is that a threat?".

Pacifici was escorted out of the courtroom by his bodyguards while reportedly repeating “I am not afraid”.

Has he been the victim of other anti-Semitic threats?

Several, along with many of Italy’s 30,000 Jews, who continue to suffer discrimination at the hands of anti-Semitic movements, according to a report last week.

Pacifici has always fearlessly protected the community, which he says regularly receives threats from “anti-zionist groups, xenophobic groups, Nazis and other right-wing groups – as well as Catholic fundamentalist groups because of our commitment."

The US State Department’s Country Report on Human Rights Practices last week revealed that twenty-six percent of Jews in Italy experienced anti-Semitic harassment, such as vandalism and online hate speech, in the 12 months up to November 2013.

But in an interview late last year Pacifici insisted that Italy is “different to other European countries” where “the risk from right-wing groups is far greater.”

He also said the reactions of the Italian authorities, public opinion and society to anti-Semitic attacks is “very strong…Even when you consider the most insignificant phenomenon like anti-Semitic graffiti on a wall on the street."

Have there been fatal attacks against Jews in Italy?

In 1982, a two year old boy was killed when five Palestinian militants bombed the entrance of Rome’s synagogue as families made their way home from the Sabbath service.

Pacifici’s father, Emanuel, was also seriously injured in the attack.