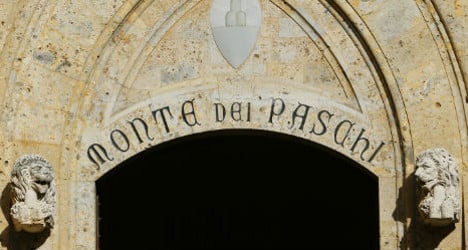 The bank, founded in 1472, suffered a net loss of €1.439 billion ($1.99 billion) last year – a blow for MPS as it prepare to raise fresh capital to avoid nationalization.

The figure far exceeded a loss of about €900 million forecast by analysts surveyed by the Radiocor news agency.

But it was an improvement on the net loss of €3.168 billion the crisis-hit bank suffered in 2012.

MPS, which is preparing to raise extra capital of €3.0 billion after May 12th, reported it had renewed an agreement with a group of investment banks led by Swiss lender UBS that they would underwrite the operation which MPS needs to survive.

The money raised is due to be used to repay a loan of about €4.0 billion which MPS obtained from the Italian state last year.

If the bank cannot obtain the new capital to repay the loan, it would be nationalised.

The bank is a pillar of the economy in the city of Siena in Tuscany.

Media reports attribute its problems to the 2007 purchase of Italian bank AntonVeneta from the Spanish group Santander for €9.3 billion, which analysts estimate was about €3.0 billion too much.

The former management of MPS is alleged to have invested in high-risk derivative products in an attempt to make up for this, but these so-called toxic products then generated huge losses.