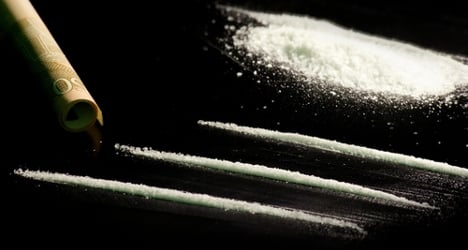 Federica Gagliardi, was stopped on Thursday afternoon after landing at the airport on an Alitalia flight from the Venezuelan capital Caracas, police said in a statement.

The high-quality drugs were wrapped in adhesive tape and cellophane and stashed in two carry-on bags, a wheeled suitcase and a backpack.

She was nicknamed by gossip magazines as the "white lady"  ("dama bianca"), because she was dressed in white when snapped among the former prime minister’s delegation at the G8 summit in Toronto in 2010.

Her presence alongside Berlusconi at the summit triggered rumours that she was vying for the role of ‘first lady’ alongside his current fiancée, Francesca Pascale, and a handful of others.

Gagliardi, 32, has a law degree and is said to speak three languages. She worked in public administration with the Rome authorities for a year before putting herself forward as a local elections candidate in 2008 on behalf of the L'Italia dei Valori, or Italy of Values, party, but only attracted 24 votes.