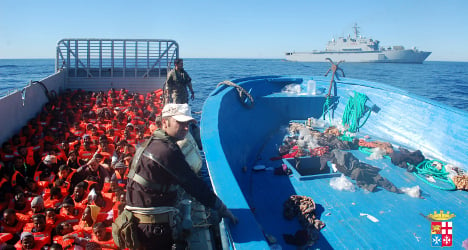 The Italian frigate Grecale pulled 323 Syrians and Palestinians to safety late on Monday, after helping rescue another 273 migrants from Eritrea, who were taken aboard the gunboat Sfinge, the navy said in a statement.

The migrants, including 103 women, were spotted by a plane patrolling the seas off Italy as part of an operation launched after two October shipwrecks in which hundreds drowned.

The navy has carried out 76 missions since the "Mare Nostrum" operation began, rescuing 10,134 migrants from rickety boats, including 1,019 minors.

A total of 2,156 migrants landed in January compared to 217 in January 2013 and two dead refugees were found on February 18 when a boat with 120 migrants was rescued.