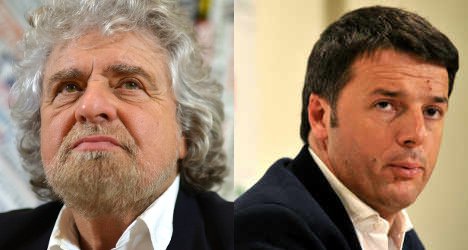 Speaking at an event on Tuesday, Renzi called on Italians to “recount what type of Europe we imagine” in order to “defeat populism”. The prime minister picked out Grillo and his anti-establishment M5S party as one to be aware of, in addition to the smaller Northern League, Rai News reported.

Both parties have rallied against the central government in Rome and sought to weaken ties to the EU.

The prime minister’s warning comes as campaigning gets underway across Europe for the parliamentary elections between May 22nd and 25th, in which 751 MEPs will be elected across the region.

But despite Renzi’s criticism, Grillo has denied being anti-European and in January said he was sorry that “the term ‘populism’ has become an insult”.

The M5S leader has called for a referendum on Italy’s EU membership but earlier this year said he does not “want to be considered the reactionary of Europe”. Grillo has vowed to campaign for the European Parliament elections and is confident of winning, telling reporters in Rome he “will go all the way”.

While Grillo and Renzi gear up for the May elections, one of Italy’s most famous political players will be left watching from the sidelines.

Silvio Berlusconi’s advisor last week announced the former prime minister would stand in the elections, only to see his hopes dashed by Brussels. European Justice Minister Viviane Reding said Berlusconi’s candidacy “won’t be happening”, as Berlusconi is ineligible due to a tax fraud conviction last year.