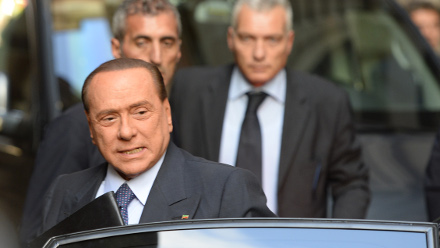 The former premier was sentenced to a year in prison for fraud last year, and his last hope of appealing against a ban from public office linked to the
conviction was quashed Tuesday by the supreme court.

Italy's top court upheld the ban, which blocks the media magnate from running in elections, and his expulsion from the Ordine Cavalleresco al Merito
del Lavoro — an Italian order of knighthood reserved to entrepreneurs – was certain to follow.

The order's rules stipulate that members must exhibit "exemplary civil and social behaviour" and, according to Italian media reports, there had been calls from within for Berlusconi to be banished.

The 77-year-old preempted his ouster by voluntarily withdrawing from the order and relinquishing the title of "Il Cavaliere" ("The Knight").

Berlusconi became the youngest member of the order when he joined in 1977.

While he has been dogged by legal woes for decades, the tax case has been the only trial at which he has been definitely convicted.