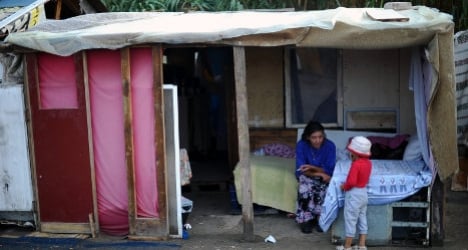 The “Gypsies strictly forbidden from entering” (“È severamente vietato l’ingresso agli Zingari”) sign was spotted in a bakery window in Rome’s Tuscolano neighbourhood. A photograph was published on Thursday by 21 lugio, an association campaigning for the rights of Roma and Sinti traveller communities.

A photograph of the sign was published by the 21 luglio association.

The sign recalled those of Nazi Germany, when Jews were banned from shops, and racial segregation in South Africa during the Apartheid era, the association said.

“Are we perhaps so accustomed to a certain terminology to consider it harmless and no longer sense the gravity of some statements?” 21 lugio said in a statement.

Following a complaint made to the bakery, not named by the association, the owners removed the sign a few days ago, 21 luglio President Carlo Stasolla told The Local.

But in some quarters of Rome the bakery owners got full support.

“It’s right – they’re all thieves,” one city shop keeper told The Local. “You have to be careful around them, how can you distinguish between a good and a bad one?” she said, not giving her name. Another shop owner lamented that only yesterday she had been robbed by someone from a traveller community.

But such a view is not universal in the Italian capital. Alessandro Francia, who works at a newsagent in Rome, said the sign had “no sense”.

Certain groups should not be labelled in such a way as “we are all citizens of the world,” he told The Local. Revamping the judicial system to ensure thieves face justice is the way forward, rather than signs targeting a particular group, Francia added.

While the sign in Rome was the work of a local shopkeeper, international names have also been criticized for banning traveller communities. Ikea came under fire in 2012 after rolling out a policy to stop people from the traveller community entering the car park of one of their London stores.

More recently, the Norwegian government has taken steps to reduce the number of Roma on the streets, by rolling out a ban on begging.