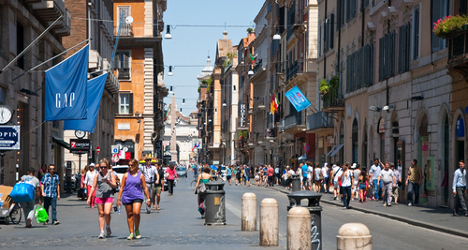 Foreigners opened more than 4,000 businesses in Rome during the first five years of the economic crisis. Via del Corso Photo: lornet/Shutterstock

Between 2008 and 2012, foreigner-owned businesses increased by 12.6 percent, to 34,084, Caritas said in its immigration report released on Wednesday.

While immigrant-run businesses are growing in spite of the economic crisis, Italians have been less successful in recent years.

Over the past five years the overall number of Italian-owned businesses has fallen by 657, although at 142,480 Italians still run more than four times the number owned by immigrants.

The business climate reflects broader changes in Rome, with an increasing number of foreigners moving to the Italian capital.

Numbers jumped by 31,759 in 2012, although the figures include the 6,398 babies born to immigrant parents who under national law are not immediately given Italian citizenship.

While some Italians fear the negative impact such an increase could have, recent figures show that immigrants are giving the state coffers a valuable boost during economic hard times.

Foreigner workers contributed €13.3 billion in taxes in 2014, topping the state costs of immigration by €1.4 billion, according to statistics released in November.