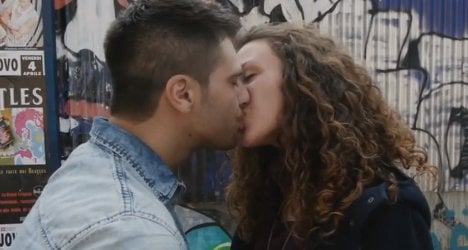 It opens with an expectant and awkward air, a few handshakes and lots of giggling. The now globally famous First Kiss video, part of a marketing campaign for a Los Angeles-based clothing designer, was the outcome of asking “20 strangers to kiss for the first time,” according to its creator, Tatia Pilieva.

The scenes of models, musicians and actors in each others arms proved more successful than many a Hollywood film. Within days of the video appearing on YouTube on March 10th copycat versions had popped up around the world, featuring Brits, Saudis and even kittens.

Cue the Italians, who with their own video are reclaiming the title as the most passionate of lovers.

A group of friends in Turin skipped work to roam the city’s streets and ask strangers to come together for “real kisses”.

The Italian reaction mirrors that of the LA crowd, although the couples quickly shake off any nervousness. Some lick-lopped couples appear unwilling to break away from each other and it is unclear whether the filmmakers needed to stop the streetside romances.

“This video is the result of that day. It left us exhausted, shaking, tired, and in love with life like never before,” the creators wrote on YouTube.

The three-minute clip was greeted with enthusiasm from Italians, who showered praised on the “very beautiful!” “sincere” and “cool” video. One YouTube user has already started putting plans in place for a Milan version.

Turin’s collective of cupids has also created their own website, Imperfettisconosciuti.org (Imperfect Strangers), to “spread the love and help us share this message with the whole world.”