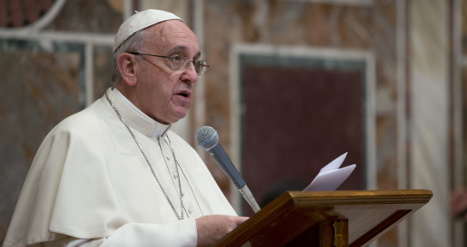 Over a thousand people are expected to attend prayers with the Pope in a church near the Vatican, where a list of 900 names of victims of mafia violence will be read out – from butchered toddlers to renowned anti-mafia Judge Giovanni Falcone, blown up in his car in 1992.

The ceremony comes the day before the annual international day of commemoration organised by the Catholic Libera association, which campaigns to confiscate mafia assets across Italy and reallocate them to those in need.

Numerous priests fight against the Cosa Nostra in Sicily, the 'Ndrangheta in Calabria and the Camorra in Naples – sometimes paying for their bravery with their lives – but the Italian Church also has a darker side.

Mafia dons have historically attended mass, often receiving lavish funerals and presenting themselves as good Catholic benefactors, stepping in to serve local residents where the state has failed to help. They also claim to live by a "code of honour".

Cozzi said the murder of a three-year-old this week in mafia retaliation was the latest proof that such a code did not exist, and has never done so.

"In the list of victims' names there are at least 80 minors. A mafia which does not kill children does not exist, they have always killed children," he said.

The Church has long been marred by reports of financial corruption, with the Vatican Bank embroiled in claims of mafia money-laundering.

It was the main shareholder of the Banco Ambrosiano, which collapsed in 1982 amid accusations of mafia association. Its chairman Roberto Calvi – dubbed "God's Banker" – was found hanging from a London bridge that year in a suspected murder by mobsters.

Francis has moved fast since his election last year to clean up the Vatican's scandal-plagued finances, setting up a commission tasked with reform and inviting in external auditors. Suspect accounts have been closed or flagged up for deeper inspection.

The dirty accounts "are an open wound", and if the Catholic Church is serious about tackling organised crime, full transparency is the first step, Cozzi said.

The task has become more urgent than ever as the mafia increasingly swaps risky markets like weapon or drug smuggling for economic crimes.

"The real territory that needs controlling is a virtual one, with no borders, no tolls, no customs: the economy," he said.

Usury has also become big business in the wake of the economic crisis, with criminal groups "the only ones in possession of much-needed liquidity."

As well as casting light on its murky books, the Vatican has made efforts recently to honour those religious leaders who have stood up to the mafia.

Last year, murdered priest Giuseppe Puglisi was beatified for his tireless attempts to help young people in the Sicilian city of Palermo escape the clutches of the "Octopus", as the Cosa Nostra is nicknamed.

In March, a ceremony marked the 20th anniversary of the assassination near Naples of another priest, Don Giuseppe Diana, known as "Don Peppino".

The pontiff has also made a point of speaking out loudly against human trafficking, "one of the mafia's big businesses", Cozzi said.

Nicola Gratteri, a respected state prosecutor in the southern Calabria region, said in November that the 'Ndrangheta was "nervous".

"Those who up to now have fed off the power and wealth coming directly from the Church are nervous, upset," he said. The Pope "is dismantling the Vatican's economic centres. If the mafia bosses can trip him up, they won't hesitate."

The Vatican took the warning in its stride, insisting there was "no reason for concern".