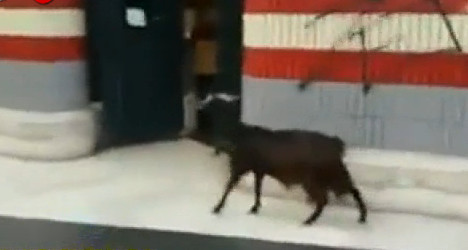 To the bemusement of metro passengers, a goat sauntered into the Valle Aurelia station over the weekend, Il Messagero reported.

One onlooker captured the scene on video while others wondered where it had come from and who it belonged to.

The video soon did the rounds on social networks.

This isn’t the first time wild animals have appeared on public transport to the bemusement and delight of commuters.

In February, a wild boar was seen apparently standing alongside commuters on a number eight tram, near the area of Trastevere in the capital.

But experts were convinced the animal was instead a wild pig.

In November last year, a group of friends in Bordeaux, France, gained notoriety after they drunkenly kidnapped a circus llama named Serge and were snapped taking him on a late-night tram ride.

But the circus director dropped charges against the group, saying he has “nothing against them”.