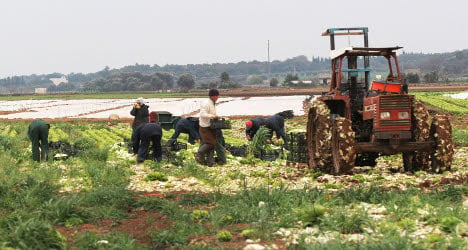 Alberto Barbieri, the general coordinator of Doctors for Human Rights (Medici per i diritti umani, MEDU), said the situation for workers “continues to be disastrous”.

He was speaking during a press conference on Italy's seasonal in Rome on Tuesday morning.

Following a MEDU project in Italy’s southern Calabria region, Barbieri said a third of agricultural labourers treated by doctors live on just two meals a day and work up to ten hours a day.

Farm workers, the majority being young men from West Africa, are housed together in abandoned buildings without running water or heating. They are often paid €25 a day or less, without contracts, Barbieri said.

“The working conditions and treatment of immigrants remains disastrous, incompatible with the principles of a country in which respect for fundamental rights should always be guaranteed,” he said during a press conference on Tuesday morning at Italy’s parliament.

While Barbieri focused on the Calabria project, he said similar conditions existed across Italy.

Dispelling the commonly-held belief that most migrant workers are illegal immigrants, Barbieri said that 70 percent of those treated by MEDU had permits to work. Of those, 45 percent had been granted asylum with humanitarian or international protection visas, similar to refugee status.

Lamine Masini, a Senegalese former farm worker, said that he was “shocked” to see that labourers were treated like “slaves”.

“When I arrived, I looked into renting a house, but for me it wasn’t possible because they said to my face, ‘We don’t give houses to black people’,” Masini said during the press conference.

Masini said that after being unable to rent a house, he moved into an abandoned building. “There, for me, the shock continued.  In Senegal, I had the possibility to turn the lights on, but here there were no utilities.

“I went three kilometres to get water, carrying it on my shoulders because I didn’t have a bicycle,” he continued.

In his experience, farm owners “consider workers as slaves”, constantly shouting at labourers, and said the situation was “shameful”.

Barbieri called for urgent government action, ahead of the new agricultural season starting in November.

National, regional and local institutions must make a “concrete pledge in order to immediately go ahead with preparations for a plan” to tackle the issue, he said.

“This is a problem that concerns not only the thousands of immigrant workers, but all Italian citizens."