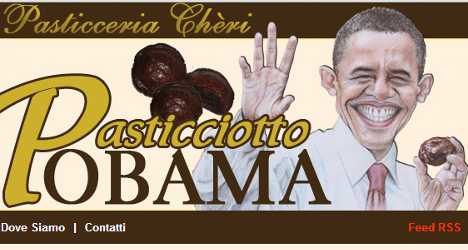 In an interview with The Local last year, Angelo Bisconti, a staunch fan of Obama, said the special cake, named ‘pasticciotto Obama’, a type of pudding, was his way of honouring America's first black president.

From 7am on Thursday, he will give away 5,000 cakes from a food stall on Rome’s Via Veneto, close to the US Embassy, as a “symbol of welcome to the president”, he told the news website, Resto Al Sud.

“I know it will be difficult to realise my dream of meeting him, but I’ll still be there,” he added.

“I owe respect to a person who changed my life, and to whom I owe my professional luck.”

Bisconti’s Salento-base bakery, Pasticceria Chèri, has thrived since it started producing the special cake in early 2009.

The success was marked with the opening of a factory in his town of Campi Salentina on July 4th, American Independence Day, last year, where a team of 10 now produces 15,000 cakes a day.

The unlikely presidential marketing ploy dates back to November 5th, 2008, when Bisconti and his team were scouting for a different recipe for their normally white pasticciotto, he told The Local ahead of the factory opening. After tweaking some of the ingredient measures and adding cocoa to the mix, he and the rest of his baking team were delighted with the results.

As they wracked their brains for a name, news that the United States had elected its first black president broke on the radio.

"That was when the name came to us, it was our tribute to the new president," Bisconti said.

To help promote the cake, Bisconti launched a website featuring a caricature of a smiling President Obama, holding a pasticciotto.

The cake’s popularity has also crossed the Atlantic, with many sold in Brio in New York, an Italian restaurant owned by Carlo Scoditti.

President Obama is due to arrive in the capital on Wednesday evening.