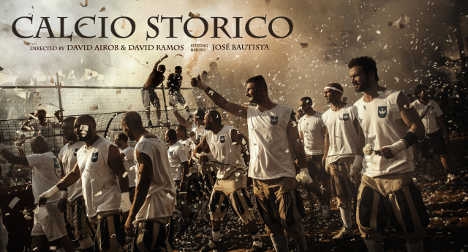 Co-directors David Airob and David Ramos, as well as sound designer and multimedia editor Jose Bautista, have received the "Golden Eye" awards and diplomas for their achievements from the World Press Photo, the Amsterdam-based organizer of the world's leading contest in visual journalism.

“It is remarkable that the number of entries to the contest has increased by one third since last year. The overall quality of submissions indicates that many more have a grasp of visual media – a promising indicator of things to come," he said.

He added: "There is clearly no one model for success in the practice. You can work in teams large and small, with the support of a major organisation or local community. The smallest stories can speak to wider truths. The possibilities of multimedia are immense.”

The Spanish entry, Calcio Storico, tells the story of the Calcio Fiorentino, an early form of football, originally played only by the aristocracy.

Currently, a Calcio Fiorentino tournament is held every year, on the third week of June at Piazza Santa Croce in Florence.

Four teams play against each other to the finals that take place every year on June 24th, the day of San Giovanni, the patron saint of Florence.

This historic game had not been played for 200 years until the tradition was revived in the 1930s.