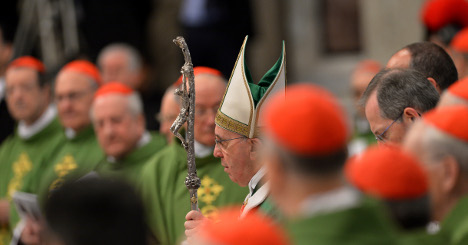 Foreign cardinals have been awarded prestigious posts within the Vatican. Vincenzo Pinto/AFP

Popes may come and go – and three in a row now have been non-Italian – but the inner workings of the opaque Vatican bureaucracy, the Curia, have traditionally been the province of Italian apparatchiks.

Like Francis, his predecessors John Paul II and Benedict XVI found themselves in the midst of back-stabbing and turf wars in the Catholic Church's corridors of power, but they had little appetite for disturbing the hornet's nest.

The world's first Latin American pontiff however has had no such qualms, readily appointing fresh faces from diverse countries – including lay people and women – much to the chagrin of the old guard.

Putting himself on what one commentator dubbed a "collision course with the Curia", the Argentine has set up several international committees. The latest, created to root out paedophilia in the Catholic Church, includes only one Italian out of eight.

The same is true of a body that he set up in April last year, just one month into his papacy, to advise him on reforming the Curia – his council of cardinals, nicknamed the G8.

Foreign cardinals have been awarded prestigious posts, from the Australian George Pell – head of the new economy ministry – to Germany's Reinhard Marx, who leads up a council tasked with overseeing the Vatican's economic management.

Marx is assisted by Britain's Brian Ferme and Alfred Xuereb of Malta – who doubles as the pope's very influential private secretary.

"By entrusting delicate government tasks to hierarchies that are made up mainly of non-Italians who are not resident in Rome, the pope is putting himself on a collision course with the Curia's traditional power," editorialist Ernesto Galli Della Loggia wrote in Italy's leading daily Corriere della Sera.

"What seems to emerge is a plan to concentrate (power) not in Rome, but in his person," he said.

Galli Della Loggia described what Francis is up against: "A certain shrewdness, an ability to mediate (and) impalpable but enduring influences" but also "ferocious ambition, corruption and careerism and, sometimes, secret wantonness".

Lay people and women — traditionally underrepresented in the leadership of the 1.2 billion-member Church – figure increasingly in new committees.

A body tasked with carrying out a detailed inquiry into the Vatican's administration is made up of seven lay people, including a woman, while the new committee on paedophilia includes five lay people – four of whom are women – and just one cardinal.

Perhaps the most eye-opening appointment to that panel was that of Marie Collins, an Irish survivor of sexual abuse by a chaplain and an outspoken campaigner for victims' rights.

What is more, instead of dictating the committee's mandate, Francis is confident that "the members can draw on their own actual experiences to define the new organ's remit themselves", according to Marco Politi from Il Fatto Quotidiano.

All this does not mean the pope is giving the Italians the cold shoulder: he has given at least two key posts – the secretary general of the bishops' assembly and the prefect of the congregation for the clergy – to trusted Italian prelates.

But those who longed for the 77-year-old to decentralise and diversify power at the highest levels of the Holy See hope Francis will continue as he has begun, ignoring the gnashing of teeth from the ousted old guard.