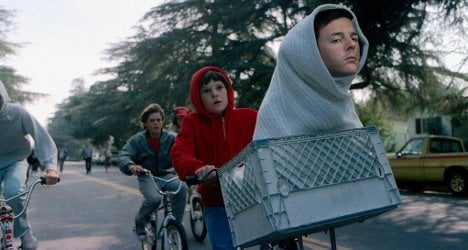 Like Rome Mayor Ignazio Marino, Renzi has become known as a cycling politician who before his premiership could be spotted riding around his home city of Florence.

A photograph of one such ride, with Renzi clad in a smart-casual suit and the wind in his hair, became an instant hit with Italians, boosting the politician’s reputation as a man of the people.

Now one Italian has transformed the image into a blog, In bici con Renzi (bike with Renzi), a play on the “with Renzi” supporters’ slogan, with the prime minister cycling through famous landscapes and film scenes.

The edited photos see Renzi cycling along a fashion catwalk, past Egypt’s famous pyramids and even on the pitch at a Milan football game. The young premier also appears in Hollywood classics, including films ET, Psycho and Forrest Gump.

“It’s a joke, a narrative experiment of the imagination,” creator Andrea Federico Cecchin told The Local. He created the blog after chatting to friends in Turin, just a few days after Renzi was sworn in as prime minister last month.

“The photo of the premier on a bicycle is beautiful and fun, I couldn’t resist,” Cecchin said.

Rather than being a criticism of the country’s new prime minister, the blog’s creator said it was instead “a nod to his [Renzi’s] great communicative spirit” in choosing to have himself snapped on a bicycle.

Renzi has promised to push a reform a month through Italy's notoriously slow legislature, an "ambitious agenda" according to Cecchin. But he remains supportive of Renzi’s bid to get Italy moving – on or off a bicycle: “I hope that the morass of Italian politics allows him to achieve at least some results.”

CYCLING
OPINION: Why cycling in Rome isn’t as crazy as it sounds
Url copied to clipboard!