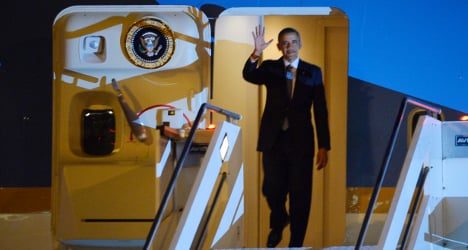 The talks between the first Latin-American pope and first African-American US president will focus on tackling the gap between the rich and the poor, but are likely to spill over into thornier issues such as abortion, homosexuals and contraception.

The meeting at the Vatican comes as a welcome rest-stop for Obama during a six-day European tour dominated by the crisis over Crimea, and the US leader will doubtless be hoping some of the Pope's overwhelming popularity will rub off on him.

Obama will also meet new Italian Prime Minister Matteo Renzi and President Giorgio Napolitano during his visit to the eternal city, as well as going on a private guided tour of the Colosseum.

Diplomatic relations between Italy and the United States are close, though Rome still needs some convincing on the value of imposing sanctions on Russia over the Ukraine crisis, amid fears it would take a toll on a key market.

Italy's 39-year-old Renzi, who used Obama-style catchy slogans and social media campaigns to shoot up the political ladder, will be keen to strengthen ties with the US leader.

But political watchers say the meeting with the former boy scout will be overshadowed by talks and a photo opportunity with the 77-year-old Pope.

Obama is "mostly going I think to bask in the glow of the new Pope," said Jeremy Shapiro, visiting fellow at Washington's Brookings institute.

His main aim will be "to highlight their sort of mutual attention to the problems of poverty and inequality. This isn't really a foreign policy stop," he said.

According to the White House, Obama hopes to speak to the Pope about their "shared commitment to fighting growing inequality", though the peace process in the Middle East, the environment and immigration are also expected to be on the table.

Obama, whose approval rating has been slipping, will be keen to repeat his denunciations about income inequality, which he has described as "the defining challenge of our time".

Earlier this month, he used the National Prayer Breakfast in Washington to argue that his calls for tax hikes on the rich and curbs on abuses by big banks had a strong moral and religious grounding, in an election-year swipe at Republicans.

Pious religious observance should guide political motives and lead to policies that help the sick and the needy, he said – echoing Francis's rallying cry for more to be done for the poor and disadvantaged.

The Pope's critical comments about capitalism last year saw him forced to rebuff accusations from rightwing Americans that his teaching is Marxist. But his condemnation of "the economy of exclusion and inequality" won the support of progressive Catholics.

Obama said he was "hugely impressed" by Francis's inclusive approach after the Pope called for the Church to stop obsessing debating teachings on abortion, homosexuals and contraception.

However, Vatican experts say the relationship is not as cosy as it once was between Pope Jean Paul II and Ronald Reagan, and Francis is unlikely to refrain from tackling Obama on his domestic and foreign policy.

The pontiff spoke out strongly against a proposed military intervention by the US in Syria last year, organising a vigil at the Vatican which drew tens of thousands of people.

The US Conference of Catholic Bishops has repeatedly challenged Obama's signature accomplishment, the Affordable Care Act, arguing that it the health care scheme violates religious freedom by requiring for-profit corporations to provide insurance for contraception.

Controversy surrounding the Affordable Care Act and Obama's drop in popularity risk resulting in a Republican victory in an upcoming Senate election, which would dramatically weaken the US leader's negotiating position for his remaining two years in power.

Religious expert John Allen told Vatican Radio Obama will be fishing for Catholic votes to help him keep a hold on the Senate.

Words of support from Francis would certainly boost his case: a survey published by the Saint-Leo University found that Francis was popular with 85 percent of Catholics and 63 percent of Americans.

Watch a video of a cardboard Obama out and about on the streets of the Italian capital, created by the US embassy in Rome: