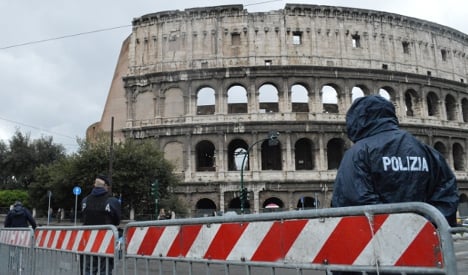 Obama touched down in Rome last night, the latest stop on his whistleblow European tour, ahead of talks today with Pope Francis and Italian leaders.

While Thursday’s meetings got off to a strong start, with Obama heading to the Vatican, Romans have expressed concern at the negative side effects of the state visit.

After meetings with Italy’s prime minister, Matteo Renzi, and President Giorgio Napolitano, Obama is due to visit Rome’s Colosseum, sending the area into lockdown. The historic site has been shut to visitors and puzzled tourists were today left studying paper maps outside the closed doors of the metro.

Police began to clear the area of people at lunchtime, with Obama expected to arrive at around 4.30pm. Some businesses have closed as a result, resulting in lost revenue for locals.

A US flag hangs outside a closed souvenir shop opposite the Colosseum. Photo: Rosie Scammell

Shutting up his tourist stall on Via dei Fori Imperiali, the avenue which connects the Colosseum with central Rome, one vendor said the visit would have a dire impact on workers already suffering in Italy’s economic downturn.

“Around 120 of us have to close for the afternoon,” said Michael, citing everyone from souvenir sellers to ice-cream vendors who were forced to shut up shop due to security measures around the Colosseum.

“I have to go home now – I have rent to pay. How many families will go hungry today?” he asked.

A barista nearby said the visit was expected to be a “moment of chaos”, similar to when former president George Bush came to Rome.

But some locals remained positive about Obama’s trip, with US flags outside some shops and restaurants in the neighbourhood.

“There are problems for businesses, because of all the road closures. But students keep asking when he’s arriving,” said cafe worker Simona Marini, chatting about the air of anticipation a stone's throw from the ancient site.

Standing below a “Welcome Mr. President” banner hung above shops in view of the Colosseum, Najet Hakimi told The Local she was feeling happy about Obama’s imminent arrival.

“He’s much loved. He’s done a lot of things for America and he’s a president for the whole world,” she said. “You couldn’t have imagined it – a black president in the United States – but now anything is possible.”

More than 1,000 officers from Italy’s security forces are involved in the visit, one policeman told The Local. A helicopter could be seen flying over the Colosseum area ahead of Obama’s arrival, as police vans and officers surrounded the Roman site.