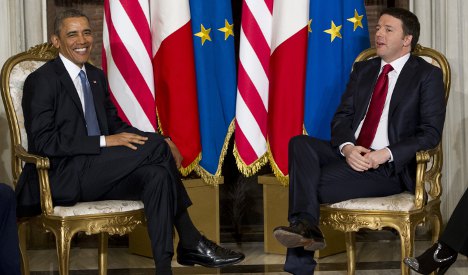 "President Obama is not only the president of the United States, obviously, but for me and my team a source of inspiration and a model," Renzi said at a joint press conference with Obama.

"The message 'Yes we can' applies to us in Italy today because we also want to say that it is possible to change things," said Renzi, a centre-leftist who only came to power last month.

At 39, Renzi is one of the European Union's youngest leaders and has spoken of his admiration for Obama and former British prime minister Tony Blair and his "New Labour" policies.

Obama said he had already met with Renzi when the Italian leader was mayor of Florence and visiting the White House as part of a delegation.

"I've just been impressed by the energy and vision that Matteo is bringing to his position. There's a seriousness and ambition of ideas," Obama said.

Watch a video of the press conference:

SEE ALSO: Obama in Rome 'to bask in the glow of new Pope'